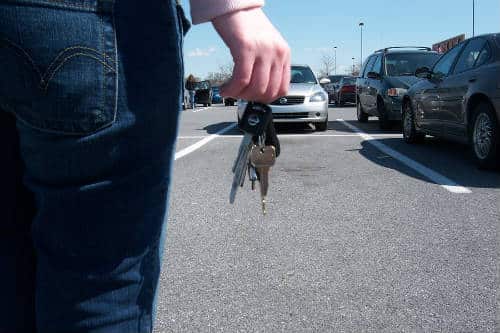 My Car Was Repossessed but the Collection Agency Still Wants More Money to Settle the Debt. Help!

I have a question from a reader today who wanted to get some information about an auto that was actually repossessed via voluntary relinquishment. He wrote to me saying, “I’m recently divorced, and my ex decided to voluntarily relinquish a car that was in both of our names just before our divorce was final.

I got a letter from a collection agency demanding more than the car was originally worth. The divorce papers state we’re equally responsible, but I know she’ll never pay because she can’t even pay child support.” He said he has custody of his child and can’t afford to pay anything at this time without some help from her in terms of keeping up with all of his other bills.

So his question really boiled down to this. He said, “I pulled my credit report, and it shows the repo, but it also shows an amount on the report that is less than a quarter of what the agency is demanding. Can I use this information as a bargaining tool to get them to settle?” He also mentioned he was told to file bankruptcy, but he’d already done that back in 2005.

First off, no, don’t think about filing bankruptcy just due to a car loan that was in both your and your ex‑wife’s name, even though the amount owed might be considerable relative to your income.

Negotiate with the collection agency

What I think you should do is, yes, by all means, try to negotiate with the collection agency that has reached out to you, and let them know, in no uncertain terms, that you are cash‑strapped, that you are a single father, that you’re raising your child on your own, and that the amount that was due, obviously, you’re aware of the fact that it’s legally your responsibility and your ex’s, but that they’re asking for a multiple of what is the amount that the car was actually worth and three to four times what’s actually shown on your credit report.

Settle with the collection agency

What I would suggest that you do, in terms of offering a settlement amount, is either try to pay a lump sum and get it all done and over with in one fell swoop, or only commit to a monthly amount that is modest and firmly within your reach in terms of paying every single month without fail.

I don’t like the idea of a monthly payment plan to pay off an old collection account, especially for a repossessed car that you’re not getting any value out of, as much as I like the idea of doing a lump sum.

If you negotiate a lump‑sum payment to pay off X amount and get this debt taken care of once and for all, try to get something called a PFD, or a pay for deletion. That’s where you agree to terms with the collection agency about an amount that will settle up the past‑due bill, and that amount will be considered acceptance of payment in full.

In exchange for you making that cash payment, the collection agency will agree to delete all negative information from your credit reports, that is, from your Equifax, Experian, and TransUnion credit reports. They won’t always agree to this, but you should certainly ask for it.

Get a letter from the bill collector

If you can get them to do this and to agree to that, make sure you get a letter in writing from the collection agency, upfront, before you turn over any money. That letter would be proof that you might need later if they don’t hold up their end of the deal and if you have to go to the credit bureau and dispute the information and say, “This was supposed to have been deleted from my report because I paid it per an agreement between myself and the collection agency.”

So I hope this information helps you. Good luck raising your child.