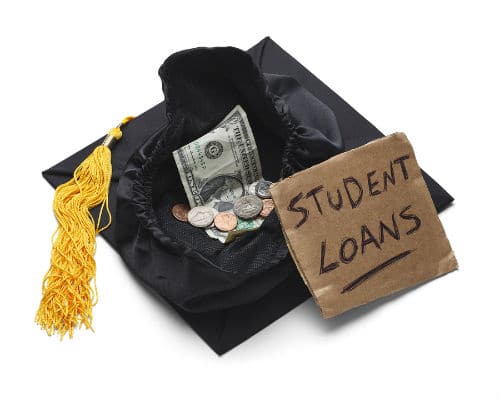 When it comes to paying off student loans, desperate times call for desperate measures.

That’s the growing sentiment among cash-strapped Americans throughout the country who are taking drastic steps to eliminate college debt.

The typical U.S. college graduate now leaves school with more than $20,000 in student loan debt, and it takes an average of 15 years to pay off student loans, according to the College Board. Overall in America, roughly $730 billion in federal and private student loans are outstanding, according to FinAid.org. Of that total, only 40 percent of all student loans are being repaid; the rest of the loans are in default, or in deferment or forbearance.

For 29-year-old Rich Saunders (pictured) of Hartford, Conn., getting a handle on his student loans has meant swallowing his pride and sacrificing some personal freedoms.

Saunders attended Boston University and earned an English degree in 2004. After a year-long bout of unemployment in 2006, his $120,000 in student loans became unbearable. That’s when the relentless collection calls from his private lenders intensified.

“That was very rough. I had calls pretty much every day. It didn’t look like I’d ever escape,” Saunders recently told WalletPop, adding that the debt collectors also harassed Saunders’ father, because he’d co-signed his son’s student loans.

Ultimately, Saunders moved back in with his parents for two years. It was a gut-wrenching decision, and one that made him question his status as an adult. In the end, however, he decided to give up some personal freedom and not be too proud to return to his parents’ home.

Despite the move, Saunders still owes $110,000 on his student loans. He spends $1,200 a month – half of his take-home pay – on that college debt. “I’ve had to ask my parents for help on numerous occasions, and that’s kind of a hit to my pride,” he said.

Saunders now works as a technical writer at a high-tech manufacturer. He’s also managed to get his own apartment. But he’s struggling to make ends meet, so he bikes to work to save money on gas, limits social activities, doesn’t travel and sticks to a very strict budget. He also leans on his family for support – doing laundry at his parents’ home and sometimes eating meals there. Yet Saunders cringes when asked whether he’d consider moving back home again.

“I’ve thought about it, and I could save a boat load of money,” he acknowledges. “But for their mental health and mine, it just wouldn’t be a good situation to be in.”

Laura Vidic is an Alaska resident who reluctantly went out of state in 1994 to further her education. She wanted a degree in landscape architecture – a program that wasn’t available in her home state – so she went to the University of Idaho, Moscow and graduated in 1998. To fund out-of-state tuition and other school-related expenses, Vidic took on both federal and private loans.

Getting the loans was relatively easy. Paying them off has been a major hardship. “It got so bad that my parents advanced me a portion of my inheritance,” Vidic said, to pay off some of the student loans. “I’ve even cashed in private savings, including retirement funds from a previous employer. So this student loan problem has held me back and has taken away from my future, too.”

After graduation, Vidic returned to Alaska, where she now works for a non-profit organization. She’s frustrated that – after all these years – she still owes nearly $30,000 in college debt. And she doesn’t see an end in sight, since $250 out of her $270 monthly student loan payment goes toward interest, not reducing the principal.

“I’ve paid off my federal loans” Vidic noted. “But with private loans, you’re really at their mercy.”

Contemplating suicide
Edie Irons, a spokeswoman for The Project on Student Loan Debt, agrees with Vidic. “With federal student loans, you can get a forbearance, deferment, loan forgiveness or even an income-based repayment plan,” Irons said. “But with private loans, there’s really very little room to move around.”

“They know that student loans can’t be discharged in bankruptcy court. But people are [also] filing for bankruptcy protection to clear up other debts and free up money to pay off their student loans,” she said.

“We also hear about people who are so hopeless that they talk about ending their lives because their student loans debt is so tough to get rid of,” Irons said. “People who are in unworkable situations feel like there’s no way out.”

Trading sex
As extreme as bankruptcy might be, it’s nothing compared to what a 23-year-old San Diego woman, who goes by the name Natalie Dylan, did.

In late 2009, Dylan auctioned off her virginity to fund her graduate education and pay off nearly $100,000 in student loans – loans she says were fraudulently taken out in her name by her stepfather.