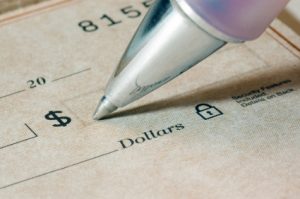 Here are 4 last minute tax tips for late filers and anyone that will owe money to the IRS.

If you can’t file by April 17th for any reason, do request an extension. That will give you an extra 6 months — or until mid October — to complete your tax return.

To file an extension, simply fill out IRS Form 4868. It’s available online at the IRS website, which is: http://www.IRS.gov. You can also find the form at many public libraries and post offices.

Just be aware that getting an extension doesn’t mean you get more time from the IRS to pay any taxes you might owe. You still have to pay taxes due by the April 17th deadline. Otherwise, you risk getting hit with late payment penalties fro the IRS.

2. Avoid penalties even if you owe

There are several penalties you can incur at tax season. One of the stiffest ones is a failure to file penalty. It can be as much as 25% of what you owe. Again, avoid that penalty by getting your taxes filed on time or requesting an extension.

There’s also a failure to pay penalty. A failure to pay taxes on time usually creates a penalty of half of 1% each month, up to a cap of 25%. That’s another big penalty.

However, as part of the “Fresh Start” initiative, the IRS is now waiving that failure to pay penalty, and giving certain people a six-month grace period to pay their tax bill.

Who qualifies for this grace period?

The IRS says that this penalty relief is subject to income limits. That income cap is $200,000 for married taxpayers filing a joint return, and $100,000 for people filing as single or head of household.

So here’s the bottom line: If you can’t pay your taxes by April 17, 2012 and you meet the criteria mentioned above, simply fill out Form 1127A to request the 2011 penalty relief.

At this late phase, it’s best to file your taxes online instead of filling out a paper return. If you’re expecting a tax refund, you can get it in as little as 10 days if you file electronically and use direct deposit.

Filing online also reduces mistakes on your return, because tax software programs double-check your math. As an example of this: error rates on taxes that are e-filed are less than 1%. But they’re 20% for returns that are filed manually.

Finally, if you earned $57,000 or less in 2011 you can use the Free File brand-name software from the IRS and get free tax preparation and free e-filing.

There will always be procrastinators. That’s why we’ll all see long lines at the post office during the day and night on April 17th. If you do wait until the very last minute, here’s what you need to know:

– Use first class postage only. This is not the time to skimp on stamps. So make sure you have sufficient postage. And if your tax return weighs more than 1 oz., put extra postage on it because if your package is too heavy it could get returned by the Postal Service for insufficient postage.

– You technically have until midnight. Your tax return must be stamped by the postal service midnight April 17th. As long as your return is postmarked by April 17, 2012, the IRS considers your return filed on time.

– Find out which post offices are open late. Fortunately, the U.S. Post Office has a special section on its website where you can find postal branches that are open late on tax day.

Then click on the link that says “Find Post Offices open later than 6 pm.” Enter your zip code and it will show you which post office have evening hours — regardless of whether you’re in New York, Chicago, Los Angeles or elsewhere.