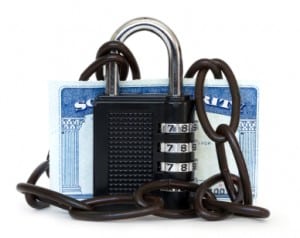 4 Reasons You Must Protect Your Identity, SSN and Sensitive Documents 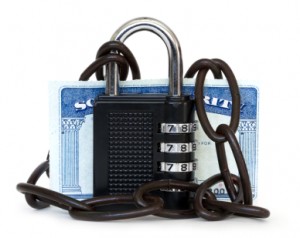 I’m often shocked at the ways in which many people in their 20s, 30s and 40s carelessly share personal information about themselves in very public ways.

We’ve all heard of people over-sharing on Facebook and Twitter, doing things like telling other when they’re away from their home or exactly when and where they’re traveling, or posting pictures of their new flat-screen in their apartment.

All of these are ill-advised practices that make it easy for crooks to potentially target you for theft.

But these days, senior citizens (and all of us), really do have to do a better job of guarding our personal identities.

That’s why I was so alarmed last night, as I was watching the Democratic National Convention, to see an older woman flash her Medicare card on national television.

Former President Bill Clinton was on stage was talking about Medicare, when all of a sudden the camera panned to a woman boldly (and foolishly) holding up her own Medicare card in plain sight.

Needless to say, the card had sensitive and private information, including her name, social security number and date of birth.

To put that information out there so publicly is like giving a well-known thief the front keys to your door and saying: “I’m going out for a few hours. Feel free to take what you want.”

I recognize that this woman probably acted impetuously, and on an impulse, simply whipping her card out to show that she was a Medicare recipient, and that she didn’t want anyone messing with her Medicare benefits.

But honestly, that’s still no excuse. You should think before you act in this electronic age, especially when something you do can be seen and broadcast all over the world in an instant.

Frankly, I also blame the camera man and PBS. I know this was a live event. But they shouldn’t have taken that shot. Or if the camera man wasn’t aware of what was being seen, someone in the control booth should’ve exercised better judgment and quickly panned away from that shot, or not allowed it to air in the first place.

As I said to my husband, what would they have done if that same woman had lifted her shirt and exposed her bare chest? Would they have taken video of the woman’s breast and shown the woman to the entire country and the world?

I don’t mean to be graphic. But to me, the logic is pretty much the same.

If you see something, even as a photographer/videographer or producer, and you realize that it clearly isn’t appropriate for the circumstances or puts someone at risk, at what point do you have a responsibility to NOT air that material?

But back to the woman herself. I do think the ultimate blame lies with her. She simply made a poor choice. Again, it was likely a careless, spur-of-the-moment thing. Nevertheless, it’s when we’re in the heat of the moment that we all need to keep cool heads.

Unfortunately, this isn’t the first time – in fact, it’s far from it – when I’ve seen an elderly person do something risky and unwise in the fast-moving electronic age.

I once wrote an online article about debt and a retiree actually posted a comment online replying to my article. In that person’s comments, he asked me for help in dealing with a debt problem and he went on to give me his social security number and home phone number. I was stunned by this extreme naivete on his part.

I did reply to the man’s request for help. And when I reached out to the man, I also told him not to post his private information in a public forum again.

When you divulge private information (willfully or unwittingly), so much can go wrong:

An identity thief can steal your social security number and file a bogus tax return.

A crook can open credit card accounts in your name.

A scammer can try to loot your banking, investment or financial accounts.

And if you’re the victim of identity theft, you lose more than money. You also lose your good credit. And you waste precious time trying to clean up the mess left by the identity thief.

So let’s all be a lot more careful, and much more guarded, when it comes to our personal data and private information.