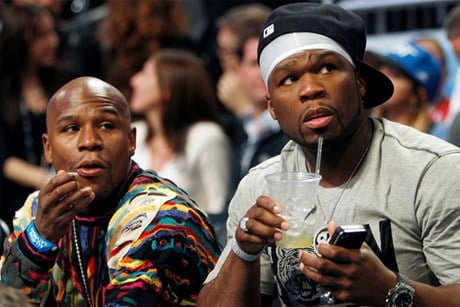 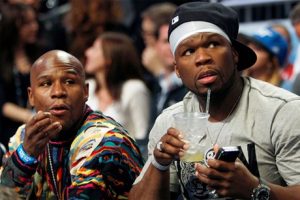 Anytime you and another person plan to have any dealings that involve money, you should put the terms of the deal in writing.

This wisdom goes for roommates who plan to live together, people who loan money to relatives, friends who start a business together, and even for celebrities who plan to launch joint ventures.

Unfortunately, too many people do “handshake” deals or they simply rely on someone’s word that everyone involved will follow through as initially planned.

But even well known multi-millionaires can break their word when it comes to money matters.

The latest example of such a situation involves rapper 50 Cent and professional boxer Floyd Mayweather.

It seems 50 Cent, whose real name is Curtis Jackson, allegedly had an oral agreement with the boxing champ, Mayweather.

The two men planned to start a fight promotion business called The Money Team, or TMT Promotions. But it didn’t pan out – and things have gone badly pretty quickly.

In retrospect, it probably seemed easy enough in the beginning.

After all, Mayweather is an undefeated boxing great. And 50 Cent, while best known as a music mogul, also happens to be a huge boxing aficionado. He even previously had a boxing promoter’s license in New York.

Besides, these guys were very good friends. For Mayweather’s 35th birthday earlier this year, 50 bought his former close pal a tricked out $500,000 custom-made Formula One car. Both men had also previously done business together, though on a much smaller scale than their planned boxing-promotion venture.

But Mayweather also recently went to county jail in Las Vegas for two months. According to published reports, while Mayweather was locked up, he was reportedly encouraged – by 50 Cent and others – to take the reins of his own business affairs and oust his long-time advisor, Al Haymon.

However, when Mayweather was released from jail in August, he’d had a change of heart about proceeding with 50 Cent and wanted to do things differently.

Meanwhile, though, 50 Cent had plowed ahead, investing time, energy and money into the duo’s planned business venture. The deal was, according to 50 Cent, that both men were supposed to put up half the seed money necessary to get their venture off the ground.

All told, 50 Cent coughed up $1.5 million recruiting fighters and another $500,000 to launch the business. But the boxing champ never came through with his half of the money.

So the fact that Mayweather changed his mind probably didn’t sit too well with 50 Cent.

Nobody knows exactly what went down privately between 50 Cent and “Money Mayweather” a nickname the 35-year-old fighter is also called.

But after a public spat, which included dissing each other via Twitter, a reconciliation doesn’t seem likely or imminent – either personally or professionally.

Still, 50 Cent is moving forward with the business idea. In November, he received approval in the state of Nevada for a boxing promoter’s license under a new company name, SMS Promotions.

Both of these men are well-heeled and presumably have (or should have) accountants, lawyers and business advisors in their respective corners.

But even if they don’t, there’s no good reason two people should begin a multi-million effort and not take the trouble to put even the basic terms of the deal on paper.

The Benefits of a Written Agreement

By committing things to writing, you reduce the risk that one party might misinterpret things, that someone would “forget” what their role or responsibilities are, or that either side would be unclear about the financial terms of the agreement.

With a written contract, both sides also have the opportunity to address a “break up” scenario and to think through what would happen if either party should want, or be forced for some reason, to back away from the deal.

Even beyond the world of superstar celebrities and bold name athletes, everyday folks enter into and bust up agreements all the time.

And business separations can happen for all kinds of reasons – including circumstances that could have been foreseen (as happens when one party already has a rocky marriage, and then goes through a divorce), as well as those scenarios that hit one party from out of the blue (like when someone gets ill or suffers a chronic medical condition).

As for Mayweather, despite tax problems in the past, he still seems to be rolling in the dough and is worth an estimated $100 million. So it doesn’t appear that a lack of money caused Mayweather to pull out of the deal.

On the contrary, he may just not be interested any more because, if an ESPN profile of him is to be believed, Mayweather is famous for insisting on calling the shots in his boxing promotion dealings.

And the joint partnership he first contemplated with 50 Cent could have, theoretically at least, been involved in marketing the single biggest fight in boxing history: a potential $250 million bout between Mayweather and Manny Pacquiao.

That’s a lot of money to squabble over.

Whatever the case, it’s possible Mayweather’s sudden decision to terminate things with 50 Cent could have left the rapper holding the proverbial bag and out a considerable amount of money that he’d invested.

Fortunately for him, 50 seems to be pressing on solo, and he will now either have to fund the boxing promotion business himself or find a new partner.

Either way, here’s hoping neither of these guys wind up in this predicament again – a scenario that could have been avoided with the planning, preparation and professionalism that a written agreement affords.