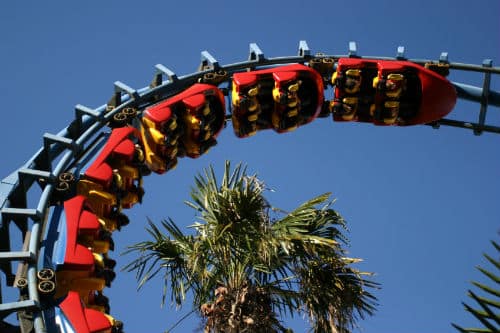 Summer’s over, but it’s not too early to plan for next summer’s fun. And I can’t stress enough the importance of planning ahead when it comes to saving money and improving your finances.   Although we just celebrated Labor Day, and the so-called end of summer, if you have kids, you might want to start planning for next summer’s festivities.   So here’s a deal you should know about – a flash sale – from Six Flags.   Not only does Six Flags have two theme parks here in New Jersey, my home state, they have a total of 18 theme parks located in nine states, as well as Canada and Mexico too.

The nine states where you can find Six Flags amusement parks are:

California, Georgia, Illinois, Maryland, Massachusetts, Missouri, New Jersey, New York and Texas.   Frankly, I did not know they owned so many theme parks, because they tend to advertise their parks locally. In other words, if you catch an ad for, say, Six Flags Great Adventure in Jackson, NJ, they tend to only promote that location.

Last year, however, my husband and I saw an incredible deal on season passes at Six Flags, and the deal is being offered again this year.   The bottom line is that if you buy season passes for more two or more people you can save 40% off Six Flags tickets.

The normal season pass is about $110. But with this flash sale, a season pass is only $62.   But here’s the catch: you have to act fast … the deal expires September 3, 2014.   According to the Six Flags website, here are the benefits you get with this promotion:

In 2014, our family of five took advantage of our passes by going to Six Flags NJ and Six Flags New England. We got free parking at both locations, which saved us about $75 during our three different visits. We plan to go back to Six Flags NJ to experience Fright Fest later in the fall.   If the current heat wave in New Jersey continues we might even slip away to Hurricane Harbor this upcoming weekend.   I estimate that we’ve already saved roughly $315 on our Six Flags visits by going the season pass/combo pass route.   This deal may not be right for everyone but if you love amusements parks like we do, it may be perfect for you. Plus, it gives you more travel options and adds to your things to do list when you are on vacation with your family.

Editor’s note: When I checked out the Six Flags website on September 4th, I noticed that they have replaced the above mentioned promotion with their September Early Bird Sale. It appears that you save just a bit less than with the previous promotion. In our opinion…still worth checking out.