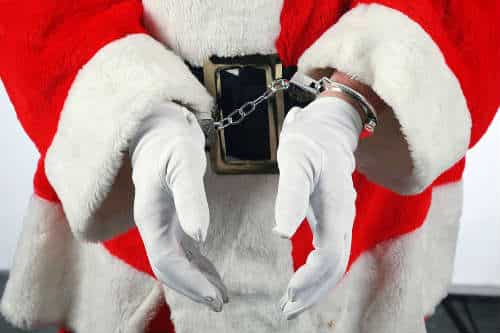 Holiday Hazards That Can Harm Your Health and Finances

During the holiday season, most of us are focused on family celebrations, shopping or taking part in social gatherings.

But a new report from insuranceQuotes.com highlights the numerous dangers lurking during the holidays – hazards that could damage your finances or physical health.

For starters, some 23 million Americans have had packages stolen from their homes before they could open them, according to the report.

Apparently, crooks are spying on people’s mail deliveries – taking advantage of those who either shop online or receive gifts via mail.

But before the rightful owners of the merchandise can open their goods, thieves steal the packages from doorsteps all across the country.

This massive theft problem no doubt causes huge financial losses for many buyers nationwide. Even if stores agree to re-ship merchandise as a goodwill gesture, this scenario almost certainly still creates a lot of disappointment, stress or frustration as people try to resolve the issue with retailers, banks and delivery services.

Dangers Outside and Within Your Home

Unfortunately, it’s not just problems outside your home that you need to be concerned about during the holidays. Be careful of potential dangers inside – and on the road too.

Furthermore, winter weather – not to mention Americans’ tendency to make merry (i.e. drink too much) – can also put you at risk for additional potential hazards:

The data from insuranceQuotes.com show that:

The lesson here is two-fold:

For starters, take extra care and vigilance to ensure that unexpected emergencies don’t threaten your physical or financial health, or the well being of those you love.

Even though we’re all extra busy amid the holidays, try not to mindlessly rush about, especially while driving. The study showed, for instance, that 21 million people have had car accidents while some are involved in truck accidents like an 18-wheeler accident because they were speeding. These are largely preventable accidents.

Additionally, double-check your insurance coverage. Now is a good time of year to make sure that your home or apartment, property and other valuables are adequately insured. It’s wise to assess your life insurance coverage as well.

Homeowner’s and renter’s insurance policies often cover many accidents and mishaps that take place in your residence. But those policies usually have a cap in terms of coverage.

“The holidays are a great time, but all the commotion and celebrating can sometimes cause people to be too relaxed,” says insuranceQuotes.com’s senior analyst, Laura Adams.

“No one is thinking of a broken leg or a house fire as they’re sipping eggnog and socializing with family,” Adams adds. “But these things do happen, and it is better to be prepared than to let it ruin your whole holiday.”