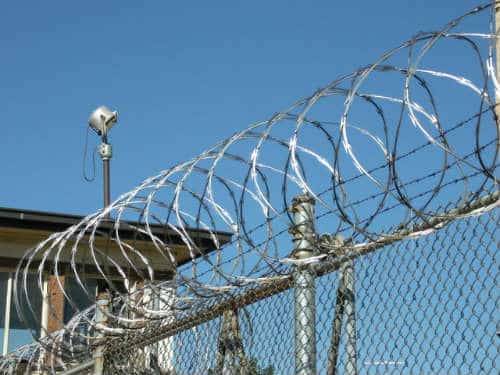 Debtors prison was abolished in America well over a century ago. But that doesn’t mean you can’t get arrested or locked up for past-due debts.

Here are four crazy instances in which authorities have hauled people off in handcuffs and taken them to jail in connection with having overdue bills.

TV station FOX 26 in Houston recently reported about how U.S. Marshals were arresting people for not paying their old federal student loans. The story highlighted the case of one man 48-year-old Paul Aker, who says authorities came after him in full force in February 2016 over a $1,500 federal student loan he received in 1987 while attending Prairie View A&M University.

Aker claims that no less than seven deputy U.S. Marshals showed up at his home armed with guns, and they grabbed him and threw him to the ground. He says he was then put in the back of a truck and placed in a cell at the federal building in downtown Houston.

Marshals ultimately took Aker to federal court. There, he had to sign a payment plan before being let go. The U.S. Marshals reportedly have about 1,500 other such warrants to serve in Houston alone on people who have defaulted on federal college debt.

When she was 57-years-old, Deborah Poplawski had no idea that an unpaid credit card debt for $250 would wind up getting her arrested, fingerprinted, and forced to spend a frigid, cold and stressful night in jail. But that’s exactly what happened in 2010, according to a report in the Minneapolis Star Tribune.

In Minnesota, the paper found, judges have issued arrest warrants for people who owe as little as $85 — less than half the cost of housing an inmate overnight.

In an extremely troubling case that is currently under investigation, an unemployed Bear River City, Utah man named Rex Iverson died in jail in January 2016 – just hours after he was arrested in connection with an overdue ambulance bill.

According to a report in the Standard-Examiner, on Christmas Eve 2013, Iverson incurred an ambulance bill that he never paid. In September 2014, Tremonton City won a small claims judgment against Iverson ordering him to pay the city $2,376.92. When that judgment didn’t get paid and Iverson didn’t show up to court, he was arrested Jan. 23, 2016 a by a county sheriff’s deputy on a $350 bench warrant. Iverson, who was 45, died that afternoon in a jail holding cell. His death is now being investigated.

In 2013, a 26-year-old Baltimore County, Maryland man named Bryan Bookman told the Baltimore Sun newspaper about how he was arrested following a dispute with his previous landlord. Bookman said he’d leased an apartment in Essex several years before then. But when he lost his job, he couldn’t pay his rent.

So he moved back in with his mother near the end of his lease and said he figured his security deposit was more than enough to cover any rent balance owed. His landlord, Sawyer Property Management of Maryland, disagreed and got a $2,616 judgment against Bookman in 2010, which ultimately led to his arrest in 2012. If you ever happen to be in this position, check How to Post Bail Online at the link.

“It was the most scariest thing in my life,” Bookman said, adding that he shared a cell with a gang member and someone arrested for robbery.

The same year that Bookman was locked up, Maryland courts issued 1,830 similar judgments, according to the Maryland Consumer Rights Coalition. Of those, 39 defendants were incarcerated, including one person who spent 14 days in jail.

Is This All Legal?

In case you’re wondering how this can happen or whether it’s all legal, arresting people over their debts is an increasingly controversial practice that’s coming under scrutiny.

Here’s how these scenarios are legally taking place across America.

Many companies, organizations or government agencies that are owed money hire private attorneys, criminal defense lawyer or collections firms to go after cash that’s outstanding. Those lawyers and collection agencies often go to court to get judgments against debtors.

What usually happens is that an individual fails to show up for the court hearing and then the creditor/collection agency gets an automatic court judgment. It’s the power of the court judgment — based on a person’s failure to appear — that typically allows creditors and their collections representatives to request that cops, sheriffs, Marshals or other authorities go after consumers to enforce the court judgment.

Critics are crying foul about the practice, saying it’s an abuse of local resources, an unfair perversion of the legal system by turning courts and cops into collection agents – not to mention a violation of the spirit of the law to have people arrested over their debts, even if the arrest is technically for a failure to appear in court.

But federal law and state or local laws are two totally different things.

The federal Fair Debt Collection Practices Act prohibits debt collectors from using the threat of jail time as a way to collect money from consumers.

While federal law says you can, indeed, go to prison for two debts – taxes and child support – it doesn’t permit you to be imprisoned for “civil” debts, like credit card debt, loans or past-due medical bills.

States and local courts get around this prohibition, however, by imposing various fees, fines, and court orders which, if not paid or adhered to, can get you locked up. Currently, about one-third of all states in the U.S. allow borrowers who can’t or won’t pay to be jailed, according to a tally by the Wall Street Journal.

That’s why these arrests seems to be on the upswing – especially in states like Ohio, Missouri, Minnesota, Illinois, Pennsylvania, and more.

Sadly, many people arrested have claimed they never even got properly served and didn’t know they had a court appearance in the first place. Others said they simply didn’t have the money or means to go to court or repay their debts.

To minimize the chances of this happening to you, stay on top of your finances and pay all your bills to the best of your ability. If you can’t pay a debt in full, always try to work out a repayment plan.

And above all else: Should you ever get notice about a court appearance over a debt, make sure you show up to court — or at least send a legal representative in your place.