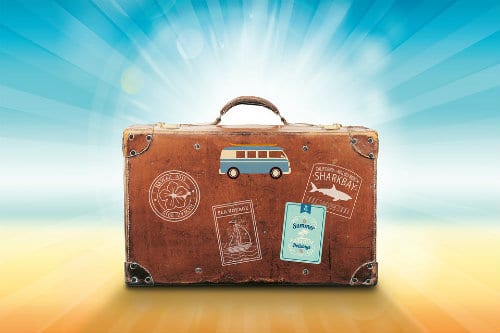 If you’re like me, you love to travel, but you also love to save a buck.

Thankfully, however, you don’t have to go broke – or wind up in debt – just because you want or need to travel for leisure or business.

In fact, you can save plenty of money on your annual travel costs just by using a few online resources that will put dollars back in your pocket every time you get away – and sometimes even when you’re still at home.

Here are 3 websites that can each save you $1,000 or more off your travel each year.

Where You’ll Save Money: Airfare

Why I Love It: Whether you’re a spontaneous traveler who can pack up and take a plane at a moment’s notice or you’re a serious planner who needs months to schedule a trip, the TheFlightDeal has deeply discounted airline fares that can benefit anyone.

Every day, TheFlightDeal sends out an afternoon email blast, giving subscribers a heads up on a collection of domestic and international roundtrip airfare deals.

On most days I honestly don’t even wait for the daily deals to hit my inbox. I eagerly check TheFlightDeal site in the morning or mid-day to see what’s been posted.

Trust me: once you subscribe to TheFlightDeal — and why wouldn’t you, since it’s free? — in no time at all you’ll be looking forward to those airline deals too. Then you’ll start oohing and ahhing over so many jaw-dropping prices that you’ll want to book a flight somewhere, anywhere — just because it’s so cheap!

Case in point: TheFlightDeal recently featured a nice deal on Scandinavian Airlines from Washington D.C. to Sweden (either Stockholm or Gothenburg). The round-trip price was just $498. As soon as I saw the deal, I told my brother-in-law, and his wife, who is Swedish; they also happen to live in the D.C. metro area.

They told me the $498 price was about half of what they normally pay to go visit Sweden.

Closer to home, Priceline has other terrific fares – especially those highlighted under The Shorthaul. That’s TheFlightDeal’s irregular feature of deals under $200 and 3,000 miles roundtrip.

I recently took advantage of one such offer, getting four roundtrip tickets for my family for only $122 each, nonstop on United Airlines between Newark, New Jersey and Miami, Florida.

Since I live in northern New Jersey, I can take any of the three major airports in my region. Newark Airport is far closer to my home than JFK or La Guardia airports, but going out of New York is often much cheaper. So I especially loved my most recent travel bargain via TheFlightDeal.

Not only was it a good deal in terms of direct airfare pricing, it also indirectly saved taxi/car service money and time because we skip venturing through New York City. Plus, we all add to our frequent flyer miles on United, which dominates the Newark airport hub.

Where You’ll Save Money: Hotels

Why I Love It: It’s my go-to resource for getting hotel discounts, especially last-minute deals

Although Priceline offers travel savings on everything from car rentals to airfares, I use it most frequently for amazing hotel deals. And when I say “frequently,” I really mean obsessively. I literally never – and I mean NEVER – book a single hotel room in any city, state or country without first looking on Priceline.

In fact, the way I go on and on about this website to family and friends, you’d think I was getting paid to promote the site, like actor William Shatner. (I’m not – but hello Priceline: if you need any additional spokespersons, here I am!!!)

Seriously, though, I’ve scored so many hotel discounts on Priceline that I’ve saved many thousands of dollars over the years. This year alone, I’ve easily kept a grand in my bank account just by using Priceline’s Express Deals, which slashes hotel rates by up to 60% – as long as you’re willing to wait to see exactly which hotel you’re booking.

Note to Priceline newcomers and those of you with type A personalities: don’t worry!

Booking a hotel without knowing the precise property isn’t nearly as speculative as it may initially sound. That’s because Priceline lets you specify the hotel class you want (like 3, 4 or 5-star hotels) and the exact area of a city you’d like to stay (say, the Magnificent Mile district in Chicago).

With Priceline Express deals, you can even see the customer ratings for a hotel before you book. That way, you know if the hotel has, for instance, an average customer ranking of 8 or 9 (that’s my preference) versus a ranking of perhaps just a 6 (not my cup of tea).

When I use Express Deals, I kind of make a game of it and it’s actually pretty fun to guess which property I’ll get.

Often, before I pull the trigger on an Express Deal, I’m able to narrow it down to the precise hotel, or perhaps two hotels, that I’m likely to get – based on the hotel amenities, the original price of the property shown, and the discounted price Priceline is offering.

And I’ve stayed at some really cool places using Priceline.

This year, my husband and I went on a business trip to the Bay Area and, using Priceline, we snagged a sweet deal at the W Hotel in San Francisco for just $143 a night. Rates at the W that week were to $289 to $399 per night.

For my hubby’s birthday in January, I also scored a Priceline bargain at a great hotel with an amazing view of the New York City skyline. The property was the Hyatt Regency Jersey City On The Hudson. The price: just $167, a really good deal compared with the rack rate of $299 per night.

Then there was the Washington D.C. conference I had to attend last month, where my husband booked us at a very lovely, hidden gem of a property: the Westfields Marriott Washington Dulles. We paid just $68 a night via Priceline. Other guests who paid rack rates forked over $158 to $187 per night.

Like I said, I could go on and on, but I’m sure you get the point: Priceline can net you some serious hotel bargains if you’re willing to be flexible about where you stay.

Why I Love It: It helps you earn cash back or travel freebies of your choice

When you’re spending time on the road, you’ll often have to whip out a credit card to pay for things – like restaurant meals, airline baggage fees or even that Uber car ride to get around in the city you’re visiting. And since you’re going to spend money on travel anyway, you might as well get rewarded for your spending.

That’s where CreditCardPerks.com works wonders. The site lets you find the best travel rewards credit cards, as well as other credit card offers that put money in your pocket based on your travel-related and other lifestyle spending.

For instance, your travel costs and other expenditures – like your regular trips to the supermarket – can easily earn you hundreds of dollars from a cash back credit card. Alternatively, with the right credit card, you can effortlessly reap cruise discounts, free hotel stays, or award miles for complimentary airline tickets.

Wondering which credit cards will give you the juiciest benefits and travel freebies? Well, CreditCardPerks.com has done the homework for you.

The site shows you, among other things, which banks and credit unions are now offering 0% APR deals, credit cards with no annual fees, as well as those with the most generous credit card sign-up bonuses — anywhere from 25,000 points to as many as 50,000 points or even 100,000 points.

CreditCardPerks makes it easy to choose the card that’s best for you. Even better: you don’t have to be an international jetsetter to take advantage of these perks.

There’s a credit card with serious travel freebies and benefits for everyone – regardless of whether you only travel once a year and do most of your spending at local stores, or you’re a serious road warrior who’s always on the go.

These are my three favorite, free sites to make sure I get every dollar, every discount and every perk to which I’m entitled when I travel.

Try these awesome websites for yourself – and see if you don’t also save $1,000 or more from each of these great resources.