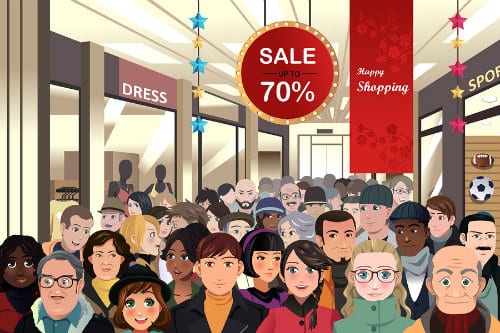 An urge to splurge is wreaking more and more havoc on traditional Thanksgiving festivities and meal-time spent around the family table.

In decades past, it was bad enough that on the day after Thanksgiving – Black Friday – people would wake up in the wee hours of the morning to be the first in line for so-called door-buster sales.

You’ve no doubt seen the TV reports about those 5 am events where hoards of people, sometime shivering in the cold, practically kill one another in an effort to beat a path to a certain aisle, looking for toys, electronics or other goodies.

Then, several years ago, another trend emerged: some people started shopping on Thanksgiving Day itself.

Retailers fed the trend, of course, by opening on Thanksgiving Day and saying they were just responding to consumer demand.

Now comes word that many Americans are willing to give up precious table time – i.e. quality time that should be spent talking to family and friends – in order to shop amid what should be normal Thanksgiving festivities.

PayPal recently released its consumer shopping predictions for the upcoming holiday season based on its own data as well as a commissioned survey. The results showed that 35% of people say they’d shop online at the Thanksgiving table for a good deal.

“Overall, technology is creating more options than ever for people to spend, send and donate money on their own terms – which impacts everything from traditional familial norms of the holidays, to the stress of the season, and even an increase in shopping in weird places,” PayPal said in a press release.

According to the PayPal survey, from the table to the TV to the toilet, Americans will shop any time and place they choose:

Shopping for bargains and discounts during the holidays is one thing.

But losing your mind – and more importantly, losing precious time that could be spent with family and friends – doesn’t sound like such a great “deal” to me.