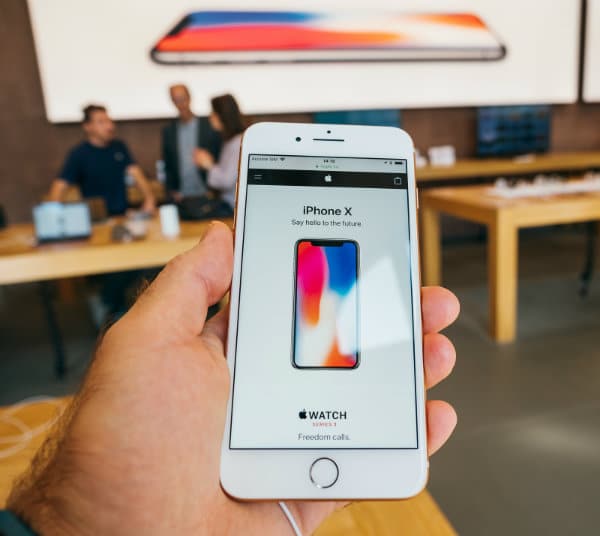 Holiday Tech: 5 Ways to Save Money on the New iPhone and Other Gadgets

Apple recently announced three new smart phones that are sure to be on lots of people’s holiday wish lists. But these high-tech devices – the iPhone 8, iPhone 8 Plus, and the iPhone X – are all very pricey tech, ranging from about $700 to $1,000.

Whether you’re getting the top-of-the-line iPhone X for yourself when pre-orders begin on October 27th, or you’re planning to buy an iPhone for someone else in the next few weeks or months, there are smart ways to cut your tech costs.

Just in time for the holidays, here are five ways to save money on the new iPhone, as well as other technology and gadgets on your holiday shopping list.

Tip #1: Sell your old iPhone and other tech

The average American owns 7 items of unused tech that are just sitting around their homes and not being used, according to research from Decluttr.com, a free website that buys old cell phones, tablets, digital cameras, game consoles, DVDs and more.

Even though selling these electronics can net you many hundreds of dollars, a third of Americans don’t know that old tech can be traded in and recycled for cash.

So if you’re eyeing a new iPhone, or even an Android device, don’t simply stash your old phone in a drawer. Instead turn it into holiday spending money.

Right now, Decluttr is paying up to $451 for iPhones. They give you the cash fast too – the next day after you ship them your phone or other electronics. And since older phones always have the highest trade-in value before a new phone comes out, now is the best time to sell your older iPhone.

One mistake people make in buying technology, especially with phones, is to not get the correct storage space on their devices.

If you don’t purchase enough space, you’ll get frustrated. But if you buy too much capacity, you’re wasting a lot of money.

Take the new iPhones, here are their retail prices and their corresponding capacity at the time of this writing:

As you can see, each bump up in capacity will cost you $150.

Similar types of tiers exist for other electronics, like the iPad, iPad touch, and even Mac laptops and computers. Ditto for other brands beyond Apple.

If you’re buying an Android device, like the Samsung Galaxy Note8 smartphone, or maybe a Kindle e-reader, expect to pay more for tech with additional capacity.

As much as people love Apple products, even die-hard Apple enthusiasts admit all the accessories that go along with the tech aren’t cheap.

To save yourself big bucks: realize that just because you buy a new iPhone, iPad, Mac or whatever, you don’t have to always replace your hardware with Apple-branded merchandise too.

Get online and comparison-shop on sites like Amazon.com or even at places such as Five Below for chargers, cords and other stuff to keep costs down. You can find some good bargains – sometimes for 50% to 75% less than what Apple charges for accessories.

Free websites like DealNews.com track all the latest deals and discounts on things like TVs, home entertainment units, cameras, phones, tables and other electronics.

So be sure to sign up for their free email service and each day they’ll give you a heads up about special promotions, flash sales, coupons and other incentives that let you get tech at a discount or sometimes even free.

DealNews does an especially good job during the holidays because they look out for early or “leaked” Black Friday deals and other promotions throughout December.

Tip #5: Win an iPhone or other gadgets

Finally, some retailers offer contests that let you win new iPhones or other tech.

For example, Verizon recently did a scavenger hunt in which it gave away 256 free iPhones (the iPhone 8) to people in the following cities: Chicago, New York, Los Angeles, San Francisco, Seattle, Denver, Dallas, and Atlanta.

What was the catch? Basically, you had to do three things: Solve a clue in each city; take a selfie and send it to Verizon; and then, if you won an iPhone, sign up for Verizon’s phone service.

Obviously, only a small number of people are going to win such contests. But if you just can’t afford to buy an iPhone or another expensive gadget you want right now or during the holidays, it’s worth a shot to enter a legitimate prize or contest sponsored by a company you know.

Just Google the words “win” and the tech item you’d like to find ongoing promotions.