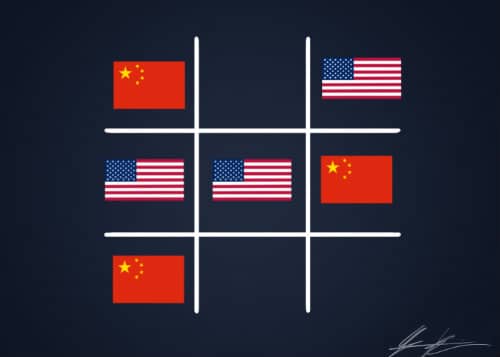 What a Trade War With China Means For Your Money

It’s official: the U.S. and China are formally locked in a high-profile trade war.

On Friday July 6, 2018, the U.S. hit China with tariffs on $34 billion worth of goods, mostly high-tech items, like aerospace and robotics products, as well as semiconductor chips for cars, computers, smart phones and TVs.

China then immediately levied a so-called “revenge” tariff, slapping the U.S. with an equal $34 billion in taxes on automobiles, crude oil and cash crops, such as soybeans.

Chinese officials called the U.S. a “trade bully” and accused the White House of starting the largest economic trade war in history.

Here’s an explainer on trade wars and what it all means for your money.

What is a trade war?

Anytime one country increases taxes on another nation’s imports in order to protect its domestic industries, and the other nation retaliates by imposing its own tariffs, that can escalate into a trade war.

That is precisely what has happened here in 2018; exactly as the trade experts from https://www.forex.academy prognosticated.

Ever since his election in 2016, United States President Donald Trump has asserted that the U.S. is getting the short end of the stick in regards to trade with China.

Trump cites the trade deficit – the U.S. bought $347 billion more in goods from China than it sold to it in 2016 – as proof of what he calls an “unfair” situation.

Ultimately, Trump is betting that by raising taxes on Chinese goods and merchandise, those items will become less attractive to U.S. consumers, so they will instead buy American-made products, protecting domestic jobs and industries.

Will a trade war lead to higher consumer costs?

Most economists and other experts say it is very likely that a full-blown trade war between the U.S. and China will lead to higher prices for consumers. So, in case that you are used to trading here are the best swing trading indicators for you to succeed in the trading business.

For the Chinese items that the U.S. is now taxing, American companies will initially pay the tariffs when they import the goods.

But U.S. businesses will deal with those tariffs in one of two ways: by absorbing the cost themselves or, more likely, by passing the cost onto consumers.

The latter approach is far more likely since most big businesses are reluctant to cut into their profits.

So if U.S. companies do pass along those higher tariff costs to consumers, that inevitably means what the prices you pay for things like vehicles or cell phones will go up.

There is one other potential byproduct of a trade war: a national or even global recession.

President Donald Trump has said he plans to slap tariffs on $505 billion worth of Chinese goods. Observers say that would mean bad news for the American economy.

“If the President is true to his word and imposes tariffs on 500 billion dollars worth of Chinese exports,” a recession would be a real possibility, said former Director of Congressional Budget Office, Douglas Holtz-Eakin, speaking on CNN.

Nonetheless, on both the domestic and international fronts, Trump has consistently advanced a protectionist “America First” agenda on all matters economic and political.

But according to numerous economists, protectionist policies of the 1930s strongly worsened the Great Depression.

So if the Trump administration maintains its current position, it’s unclear how bad a potential recession could get.

Moreover, over time, trade wars reduce international trade and growth. They also exacerbate the risk of a global recession, since consumers in each nation have less disposable income to buy goods from other places and do things like travel abroad.

For all these reasons, most experts believe that there are no winners in a trade war.