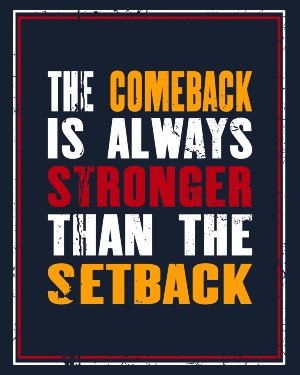 Do You Know Someone Facing a Setback?

A friend shared this with me via email. I found the advice very useful, and in turn, I am sharing this advice with you.

Setbacks are a part of life. The next time you’re facing a setback, here are a few stories about people who used a setback as a set-up for a comeback:

Alexander Graham Bell:  When he invented the telephone in 1876, it didn’t ring off the hook with calls from potential backers. After making a demonstration call, President Rutherford Hayes said, “That’s an amazing invention, but who would ever want to use one of them?”

Chester Carlson:  In the 1940’s, this young inventor took his idea to 20 corporations, including some of the biggest in the country. They all turned him down. In 1947 – after seven long years of rejections – he finally got a tiny company in Rochester, NY, the Haloid Company, to purchase the rights to his electrostatic paper-copying process. Haloid became Xerox corporation, and both it and Carlson became very rich.

Abraham Lincoln:  He entered the Blackhawk War (1831-1832) as a captain. By the end of the war, he had been demoted to the rank of private.

J.K. Rowling: Author of the Harry Potter series, Joanne was an aspiring writer and single mother living on welfare with her young daughter in an unheated, mice-infested flat. Her first book was rejected by 12 publishers before the world met Harry Potter in 1997.

And then there was the young man who submitted a paper to his Yale University management professor and got this response: “The concept is interesting and well-formed, but in order to earn better than a ‘C,’ the idea must be feasible.” The young man was Fred Smith, his paper proposed reliable overnight delivery service, and Fred went on to found FedEx Corp.

January is a wonderful time to remember that success, like beauty, is in the eye of the beholder. We have been irreversibly impacted by each of these people because they knew that failure is not the act of falling down… but it’s staying down…. and that is something they did NOT do!
Read: Why You Should Place Your Financial Goals in Writing
Share this post with someone you know who has recently faced a setback.