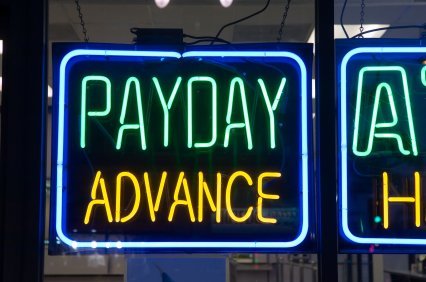 Disadvantages of Getting a Payday Loan 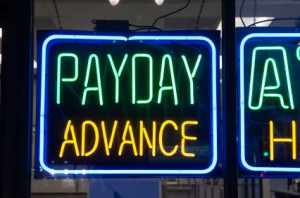 If you’ve never taken out a payday loan, great. Please never do. If you have, please don’t ever do it again. If you absolutely need to borrow a small amount of cash, turn to your friends, family or employer, but don’t get a payday loan.

What is a Payday loan?

Payday loans are short-term loans made by financial “institutions” designed to tide people over until they get their next paycheck.

Say a cash-strapped person needs money for gas, a utility bill, car repair, to help cover rent or some emergency or other reason before their next paycheck comes in from their employer.

To make ends meet until payday, they go to a “payday lender” who verifies that the borrower has a legitimate job with regular pay, and that they have a bank checking account.

The customer then gets an immediate $300 or $500 cash “loan” in exchange for writing a post-dated check for that amount, or authorizing a one-time automatic withdrawal.

But instead of getting that full amount in cash, the payday lender will deduct its fees from the amount borrowed, typically between $45 to $55. So, on a $300 loan, the borrower actually receives $255.

Fees rival that of loan sharks

The payday lenders fee, or interest, amounts to about 400% per year, some annualize to nearly 800%.

These rates are worse than what most loan sharks charge. If the borrowers check then bounces, or they go back to the payday lender to ask for an extension of their loan, they pay another $45 fee (not to mention an insufficient funds fee to their bank if the payday lender had attempted to cash the check).

In the end, some borrowers wind up paying more in fees than the total amount they borrowed. For example, if they get stuck in this vicious cycle they could end up paying $500 in interest for a $300 loan, while still owing the original $300 in principal.

Every year payday lending costs Americans $4.2 billion in “excessive fees,” according to the Center for Responsible Lending.

Congress, through a bill introduced in the House and the Senate, is attempting to pass legislation that would put a 36 percent cap on annual interest rates for consumer credit.

The cap would save $5 billion in abusive fees stripped from working families at no cost to taxpayers. While waiting for federal legislation, 15 states and the District of Columbia has already outlawed triple digit interest rates.

Payday loan borrowers resort to these loans for various reasons, but very few do so because it is the only option available to them, according to a February 2009 survey by the Center for American Progress. In the survey, borrowers cite convenience and emergencies as the largest reasons.

The FDIC has stated that providing high-cost, short-time credit on a recurring basis to customers with long-term credit needs is not responsible lending.”

The payday lending industry has about 23,000 lenders, such as Check ‘n Go, Advance America, Cash America and Check Into Cash, where a typical borrower takes out between eight to 12 loans each year.

People who withdraw a payday loan tend to have a lower income, net worth and asset level than people who do not withdraw payday loans.

These borrowers also are less likely to be a homeowner or a self-identified saver and were more likely to have previously been delinquent on a loan or have had a loan application denied.

Because payday loans are practically synonymous with high fees, hovering around 400 percent, the use of these types of loans may impede the wealth achievement for many borrowers who already have less wealth to begin with.

So please heed my advice: Don’t do business with payday lenders and subject yourself to their shenanigans.

For more financial advice, get a copy of my book Zero Debt: The Ultimate Guide to Financial Freedom.