Don’t Make a Financial Resolution Until You Read This

9
SHARES
144
VIEWS
Share on FacebookShare on TwitterShare on LinkedIn

Many people grappling with various money problems are waiting for January 1 to roll around. At that point, they’ll make a financial New Year’s resolution such as getting out of debt, improving their credit rating or saving more money.

But why wait until January? Why put off for months something you know needs to be done? In many cases, it boils down to a single word: procrastination.

Procrastination is a bad personal habit – but one that’s very common in America. Among both men and women, 20% of adults in the U.S. are chronic procrastinators, according to psychology professor Joseph Ferrari of DePaul University in Chicago.

Unfortunately, being a procrastinator takes a huge toll on your personal finances.

The Link Between Time and Money

If you take a moment to reflect, you can probably recall more than one time when procrastinating about doing something ultimately cost you money.

Maybe it was something minor: you didn’t go to the bank to withdraw money like you intended, and then you later had to rush off somewhere. But since you procrastinated about getting to the bank, and didn’t do it, you still needed cash. So what happened? You wound up stopping at some random ATM that charged you $3 for the privilege of accessing your own hard-earned money.

Perhaps procrastination has drained your wallet in bigger ways too, such as when you knew about an event in advance – say, your friend’s springtime destination wedding or your family’s out-of-town summer reunion.

In either case, you had plenty of notice about these events; months’ worth of notice, in fact. But you never got around to booking your airline tickets or hotel accommodations. So what happened? You found yourself making last-minute travel arrangements that were twice the cost than what you would’ve spent if you’d just booked your travel earlier.

Procrastination in your personal life can even lead to enormous financial consequences. Case in point: you might put off getting your car oil changed, or even worse, when feeling sick you may delay going to the doctor for some reason.

In the former situation, your car’s engine might seize up – resulting in you paying many hundreds of dollars to the mechanic or auto-dealer, expenses that were 100% preventable.

Likewise, if you procrastinate about getting a much-needed medical checkup, you could wind up even more seriously ill, with thousands of dollars in costly and avoidable healthcare bills.

Procrastination Only Worsens Your Problems

Whatever the circumstances, it’s clear that procrastination doesn’t solve your financial problems; it only compounds and worsens them.

That’s one of the reasons I recently launched a financial webinar series called Get Financially Fit Now. It’s a live, group-coaching program to help people stop procrastinating and tackle various financial challenges one issue at a time.

It was important to me to launch this initiative now, in October, as a way to aid people in recognizing and breaking unhealthy financial patterns. And one of the worst financial behaviors is procrastination.

Too often, we tell ourselves that we’ll get it together and fix a key financial problem at some point in the future.

As mentioned, some people do themselves a disservice by procrastinating and waiting until a certain month, like January, to address fiscal issues.

Other folks are waiting until they reach a certain magical age: like turning 30, 40, or 50 years old. That’s when they plan to get serious about future goals, including planning for retirement or starting a business.

And still other individuals are putting off handling certain money matters until a key life event occurs. So they tell themselves something like: “I’ll start building my emergency savings account when I get married, or I when I get a raise.”

There are a couple of problems with this line of thinking. First, despite the best of intentions, people often get derailed from doing something they say or think they will do.

Admit it: how many times have you planned or intended to save money, but then life happened, circumstances foiled your plans, and you wound up not saving anything at all – or you had to spend your savings on something unexpected?

Here’s another reality about waiting until some pre-determined point in the future to fix financial problems.

It’s unrealistic to believe that you’ll automatically change your financial behaviors in the future just because one circumstance has changed.

I know you might believe that you’ll save more money once you’re married or once you earn more money. But the truth is that getting married itself can cost a small fortune! Besides, what if you get married and then you and your spouse buy a home or have kids? Both of those things cost money and will drain your savings.

Even getting a raise is fraught with financial pitfalls. A higher salary means more taxes, more temptation to spend simply because you now have a bigger paycheck, not to mention more potential demands on you financially, such as family members and friends who might ask for cash or loans. 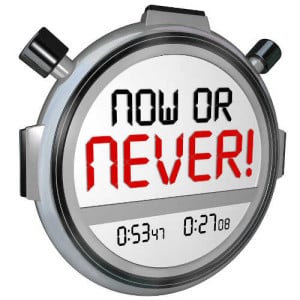 So why wait and keep procrastinating if you’re really serious about fixing what ails you financially?

To put a halt to procrastination, it’s important to first recognize if you’ve been guilty of this bad habit.

If so, resolve to stop procrastinating by getting clear about your financial goals. What exactly do you want to achieve?

Is it getting out of debt, improving your credit rating, learning how to invest, planning for your kid’s college education, or something else? Maybe you’ve been saying forever that you’re going to create a last will and testament, but it’s never gotten done. Whatever the case, write down your goal now.

Next, take concrete action toward meeting your goal. It could be one baby step, like calling your HR department to ask about your retirement plan options. Just do something! And do it now – not later.

I recently heard a funny, but true, saying: “There are seven days in the week and none of the are called Someday.” Remember that when you’re striving to banish procrastination.

Finally, build in a level of accountability by telling someone else your goals.

There’s nothing like making your goals public, perhaps by revealing them to a close friend or relative, and then having to answer to that person about what steps you’ve taken or how you’re progressing. Alternatively, a trusted financial advisor or Money Coach can serve as a great source of knowledge, support and inspiration to help make sure you stay on track with meeting your goals.

No matter what you’ve previously done, procrastination doesn’t have to hurt your personal finances. Starting today, you can take control of your money and get financially fit now!

Financial Planning Days: Get Free Money Help In Your Area

Podcast: How To Deal With High Interest Rates on Loans

On American Public Media's Make Me Smart podcast hosted by Kai Ryssdal And Kimberly Adams, we discuss the impact of inflation and higher interest rates on your wallet.

Attention professors, research heads or academics at historically black colleges and universities. The federal government via HUD is offering millions of dollars for folks at HBCUs to establish or bolster...

How to Stop Arguing Over Money With Your Partner or Spouse

Money can be an uncomfortable conversation for many, especially when it pertains to family finances. Money is commonly cited as one of the number one reasons couples argue over money,...

Here's what is known so far about the new student loan cancellation program, how you can get student loan forgiveness, the surprising ways that past and future generations of college...

Meet LeCount R. Davis, the first African American to become a Certified Financial Planner (CFP) professional, nearly 45 years ago. Mr. Davis was recognized this month by the CFP Board...