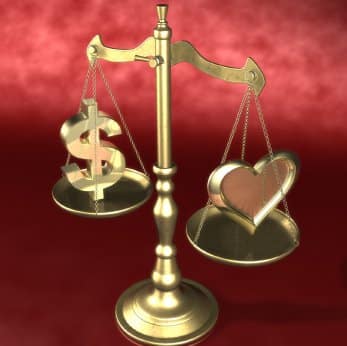 Use These 5 Tips for Financial Intimacy In Your Relationship 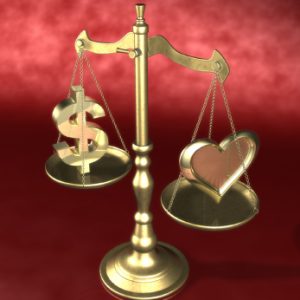 Valentine’s Day is right around the corner and as much as the holiday is about romance, finances also play a big role in what happens on Feb. 14th.

Guys are often under pressure to come up with the “big” gift – like an expensive engagement ring – or to make some other dramatic show of their love and affection.

And even among couples that have already tied the knot, money matters can loom large. Surveys show that most U.S. couples argue about money, and half of all couples report having separate accounts.

If you want to achieve financial harmony in your relationship — especially ahead of Valentine’s Day – try these five tips:

Don’t let the tough economy cause a relationship crisis.

Instead of arguing about money because funds are tight, in times of financial stress go back to the basics: plan together, establish a budget and stick to it, and agree to buy only what you really need. Couples that tackle money problems together, and take mutual responsibility for solving them, will inevitably find that their overall relationships are better for it.

Prepare for a pink slip, even if you’re sure you’ll never get one.

Even though the jobs outlook is brightening, big layoffs still occur practically daily. So guard against the possibility of unemployment or even a decrease in salary; such changes can shift the power balance in a relationship and cause tension among partners.  Even if you’re in a relationship where both jobs feel completely secure, it’s never a bad idea to plan for the unthinkable. By cutting back on frivolous spending, taking a second job, or even making money from a side business, you can make a big impact on your overall financial solvency as a couple.

Get to know each other’s money personalities.

Many times, couples don’t have their first fight about money until after they’re engaged or married.  While it’s always best to talk about your financial values as early as possible in a new relationship, remember that it’s never too late to get to know each other’s money “personalities.”

If you’re saving for a vacation to Hawaii but he won’t take a day off until you have enough to retire there, don’t despair: there is always a middle ground.  Identify each of your best spending habits and agree to meet halfway, each adopting what’s best about the other. One way to better understand one another and get on the same page financially is to join a financial bootcamp together and tackle certain financial goals together.

Make a plan for getting out of debt together.

If the Great Recession taught us anything, it’s that “debt” is a dirtier word than anyone had imagined, and yet over half of American couples enter relationships with debt. In fact, the latest figures from the Federal Reserve show that Americans added $20 billion in debt to their credit cards in November 2011. Now more than ever it’s time to get serious about money management and debt elimination.

Sit down with your partner and make a realistic plan for getting out of debt together. Then stick to it no matter what.

Studies show that many couples admit to hiding purchases from their partners. Why all the secrets?  Even if you don’t always agree on each other’s spending habits, you can at least agree that any purchase over a certain amount ($200, for example) will be discussed in advance.  Such easy relationship guidelines can go a long way in relationships.

One out of ten couples have ended a relationship due at least in part to financial issues, according to a PayPal survey. And among couples who’ve divorced, about 70% cite money problems as a big factor in the breakup. So curb your secret spending habits before you join their ranks.