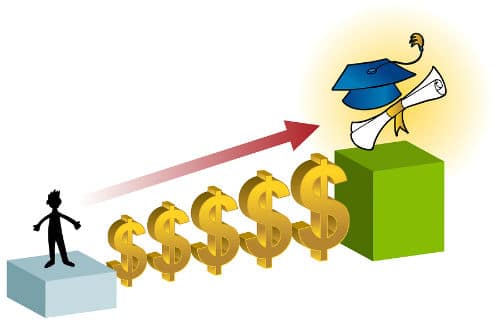 States with the Highest and Lowest Amounts of Student Loan Debt

The White House has released an alphabetized list of states with residents who have student loan debt, including a breakdown based on the number of borrowers and the amount of student loans outstanding as of January 2015.

Not surprising, California leads the list, with about 4.2 million borrowers owing a staggering $122.3 billion in student loans.

Rounding out the top five was the state of New York, where 2.8 million people owe $77.5 billion in student loans; Florida, with nearly 2.5 million borrowers on the hook for $68.6 billion in college debt; and Pennsylvania, where about 2.1 million residents owe a collective $53.3 billion in college loans.

All together, there is $1.2 trillion in student loan debt owed in America.

Here is a full list of the top 10 states in the U.S. with the highest amounts of student loan debt. Following this list is another list of 10 states with the lowest amounts of college debt.

The White House provided this information based on data from the U.S. Department of Education, which took a sampling of student loan info from the National Student Loan Data System.

For about 80% of borrowers, government officials noted, the state is where the borrower currently resides as reported by the borrower’s loan servicer.

What may not be apparent in this data is that many borrowers likely amassed debt because of their living expenses while in school – not just because the schools they attended had high tuition prices. In fact, many schools offer tuition discounts. But students and their parents often have to pay out of pocket to cover things like room and board. And here’s where lots of debt can accrue.

For example, notice the correlation between high student debt levels and high room and board charges. U.S. News & World report has found that 7 out of the 10 U.S. colleges and universities with the highest room and board charges are in California and New York. These two states likewise rank as #1 and #3 among residents with the largest collective amount of student loans outstanding.

That’s not a coincidence.

If you have a kid you’re sending to school soon, or if you’re thinking of going back to college, be sure to read my insights on why college is so expensive and what to do about it.