Credit card balances in the U.S. now total roughly $1 trillion, the most since 2009, according to recent Federal Reserve data. While not all those balances represent debt that won’t be paid off each month, many consumers do struggle with credit card debt.

One clear signal that a consumer might be in trouble with credit is having at least one card that is “maxed out,” with a balance that is equal to the total credit limit allotted on the account.

However, a maxed-out card is not always a sign of distress.

For example, if a consumer is very loyal to one card each month, charging close to the limit and paying it all off each month, this pattern will appear to be “maxed-out.” But if the owner has no problem paying it off in full each month, it’s usually not a problem.

That’s why LendingTree recently sought to find out which cities in the U.S. are truly “maxed out” on credit.

In addition to finding places people have at least one maxed-out card, LendingTree examined how high people’s balances across all cards are versus their total credit limits.

A person with both one maxed-out card, and high balances on other cards, could be struggling with debt.

In total, the company looked at data from more than 1 million anonymized My LendingTree users in 50 of the largest metropolitan areas, and created a “Maxed Out Score” from 0 to 100, with higher scores indicating where consumers are most maxed out on their credit.

Overall, most consumers are using credit wisely. Fewer than 20 percent of consumers had at least one card maxed out and utilization rates of around 30 percent. But some places are more stretched than others. 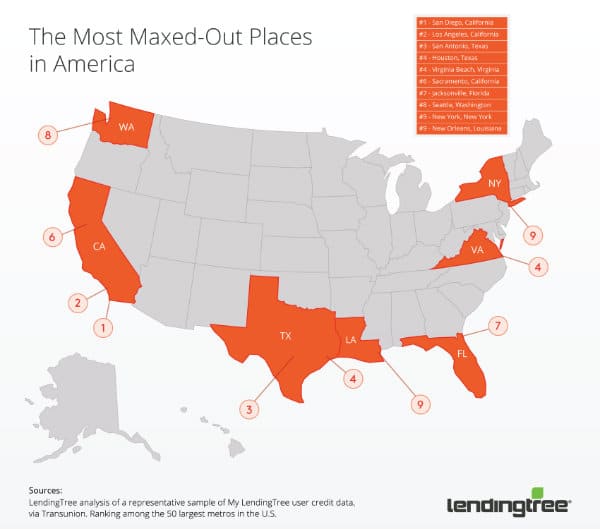 L.A. residents also push their credit further than most, with 17.5% of residents having at least one maxed-out card. Balances average $6,472, a touch lower than their neighbors to the South in San Diego, helping utilization come in at 32.0% for L.A. versus San Diego’s 32.8%.

Houston and Virginia Beach tie for fourth place on the list of the most maxed-out places in the United States.

Houstonians carry an average $6,936 in outstanding credit card balances, more than the other metros in the top 5 rankings. Houston has a slightly lower rate of residents that have at least one maxed-out card, 17.9% percent, than the No. 1 maxed-out city, San Diego. Houstonians’ average utilization rate is 31.4 percent.

If you’re carrying more credit card debt than you’d like, here are some ideas for repaying those bills as quickly as possible.

It’s easy to stick to making minimum payments, but doing so can let debt linger for much longer than necessary, with interest accruing along the way. To eliminate debt faster, you’ll need to get more aggressive in tackling your debts.

Call and ask for a lower rate

Some credit card issuers will offer a lower rate to responsible customers in hopes that you’ll remain loyal to the card. Many people are surprised at how easy it is to get a lower interest rate just by asking.

So don’t be reluctant to call and request a lower rate; the worst that can happen is that they say “no,” in which case you’re not any worse off.

Moving your debt to a lower rate card, perhaps one with a 0% offer, or even using a personal loan to pay off existing credit debt can make a lot of sense.

But this refinancing strategy only works if you’re committed to tackling your bills and you have a plan to pay off your new debt.

Also, if you do use a credit-card balance transfer or personal loan, resist the temptation to run up added credit card debt on your original card that now has a zero balance!

LendingTree used a statistically relevant sampling (over one million) of anonymized My LendingTree user data from August 2017. The rank of percentage of users in each metro with at least one maxed-out card was weighted evenly with the rank of the average utilization of revolving credit in each metro, creating a maxed-out score from 0 to 100.

My LendingTree user credit information is provided by TransUnion.

4 Smart Ways To Shop Smart, Entertain And Decorate On A Holiday Budget

How To Get Approved For A Credit Card

The Best Credit Cards to Reach Your Financial Goals

Choosing the Best Credit Card to Match Your Lifestyle

4 Smart Ways To Shop Smart, Entertain And Decorate On A Holiday Budget