Learn How To Invest In The Stock Market w/Teri Ijeoma. Click Here to Enroll in the Trade and Travel Program Now. Learn More.

If my husband gets his way, in about a year from now we’ll be replacing our 2003 Chevy Tahoe with his dream car: a new Cadillac Escalade.

In all honesty, I love the Escalade too — especially the new 2014 and revamped 2015 models. They really do set the standard for luxury SUVs.

Still, I’m always thinking about how to save money and keep our household bills as low as possible.

That’s why I was happy to learn about a new credit card that offers special perks for people like us who are planning to buy a new car down the road, but also want to be smart about their spending.

The card is the new GM card from Capital One. 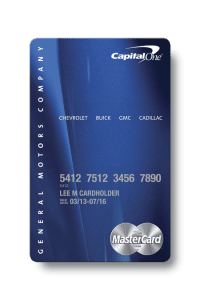 When you use the card for your everyday spending, you rack up earnings that can be applied to a host of auto-related items including:

It helps too that the GM card from Capital One has no annual fee and currently touts a 0% introductory APR on purchases for the first 12 months. Frequent flyers and other seasoned road warriors will also be happy to know that this card includes World Elite MasterCard benefits, such as concierge service, car rental coverage, and trip cancellation insurance.

So how can you tap into this card’s benefits if you’d like some extra savings toward a new car?

Here’s how it works.

For starters, you don’t have to go out charging unnecessary items just to reap the benefits of this card. Simply go to GMcard.com or CapitalOne.com/GMCard, apply for the card, and then use it when doing your normal spending or making routine purchases.

As you charge things like groceries, clothes or airline travel, you’ll start accruing earnings that can be redeemed when you’re ready to buy or lease a new car.

I should note that the GM Card from Capital One isn’t entirely new to the market. It’s actually been around for some time, but the new card has just debuted with some extra nice enhancements.

After listening to feedback offered by existing card members, the GM folks made three big enhancements to the new version of the card.

First, there is no expiration date on using the earnings you amass. Previously, rewards expired after seven years.

There’s also no cap on your potential rewards.  You get a 5% cash reward on the first $5,000 in purchases each year, and then 2% on everything after that, with no limit on the earnings you can amass.

For GM enthusiasts like myself, or even other car-owners who are open to trying a new brand, there’s one other mega benefit with the latest version of the GM Card from Capital One.

With previous iterations of the card, your earnings could be used only towards savings on certain GM models. But now any new GM car is fair game – and with nearly three-dozen models of GM cars on the market, there’s something for everyone under the suite of offerings from Chevrolet, Buick, GMC and Cadillac.

GM also promises that the redemption process couldn’t be easier. You can just show up at the dealership, give them your GM card and – voila! – they’ll be able to instantly look up your records and see how much savings you’re entitled to receive. (You can also call and look online ahead of time so you know this information).

So when you’re at the dealer, you just select the GM vehicle you want, agree on a price, have your rewards or earnings applied to the vehicle’s cost, and then drive off in your new set of wheels.

Why Buy a New Car?

By the way, some people may be wondering whether you should buy a new car at all. The one main argument against buying a new car is that it depreciates as soon as you drive it off the lot. So some people think it’s smarter to buy a used car, maybe a year or so old, just so that you don’t pay for the depreciation factor.

That logic obviously has some merit. However, you also have to think about long-term value and the overall cost of car ownership for the time you will have a vehicle.

For example, if you buy a new car and plan to keep it for seven to 10 years (as I do), you can also save a lot of money with a new vehicle, in effect offsetting the potential impact of depreciation.

For example, starting with 2014 models, all new GM cars (whether financed or leased) come with a complimentary maintenance agreement. This maintenance deal gives you perks like free oil changes, oil filter replacements, four-wheel tire rotations, and multi-point vehicle inspections for two years, or 24,000 miles, whichever comes first. The program covers up to four service visits in the 24-month period, and is fully transferrable to subsequent owners. You can’t that with a used car.

Ultimately, of course, the choice of buying a new car boils down to what’s best for your own budget and your family’s needs.

As 2013 comes to a close, I’m grateful that our Chevy Tahoe is running just fine. Plus, it’s our kind of car: a roomy seven-passenger vehicle, with great space to accommodate the needs of our family, including two growing teenagers and our youngest daughter, who turns eight in November.

*Disclosure: Sponsored by Capital One. The opinions expressed herein are those of the author and are not indicative of the opinions or positions of Capital One.

Eco-Friendly Updates To Your Bathroom – Save Money, Save The Earth!

Eco-Friendly Updates To Your Bathroom – Save Money, Save The Earth!