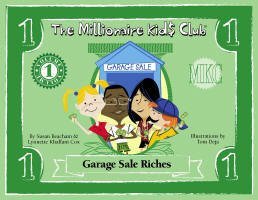 Books to help your children learn about money 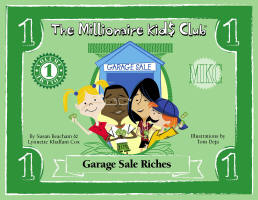 When Isaiah’s mom asks him to clean out the family garage, she promises her son that he can keep all the money he makes from a garage sale. Sorting through all those boxes, however, proves to be a very big job. So Isaiah enlists the help of his friends, Sandy, Dennis and Stephanie. When the four pals start dreaming of what they’ll do with all the money they will earn, they name themselves The Millionaire Kids Club. But after all their hard work, will they quickly waste their money with a trip to Mega Mall or will they learn a valuable lesson about spending and saving?

In Social Studies class, it’s time to talk about “current events” from the newspaper. Three members of the Millionaire Kids Club – Isaiah, Sandy and Dennis – have agreed on a topic. They want to explain why so many homes in the community have “For Sale” signs. But their buddy, Stephanie, doesn’t want to talk about this subject. After all, her family may have to sell their home too – and that has Stephanie terribly upset. Stephanie’s dad has lost his job and can’t pay for their home anymore. So will Stephanie’s family be able to save their house? Or will they have to move out, and will Stephanie have to leave the neighborhood and her closest friends?

Mrs. Berry’s weekend math assignment is one of the toughest ever. In fact, she seems to have gone a little overboard – she thinks pennies have incredible powers! Powers like curing diseases, building schools, and delivering food and medicine. Mrs. Berry wants the class to explain how this can be. Isaiah, Sandy, Dennis and Stephanie decide that as members of the Millionaire Kids Club, there’s no money problem they can’t solve. They’re up for the challenge! But as they start their research, they also discover that Sandy has a money concern of her own – her mom has lost her job. Can the pals solve their crazy penny homework and help Sandy feel a little better at the same time?

Putting the “Do” in Donate
Buy Now


Dennis can’t wait to get to school on Monday to tell his friends about the amazing event that happened at church. On Sunday, Dennis was one of 50 people at church who received $100 from his pastor. But there’s a catch: Dennis has to use the money to help someone less fortunate. With advice from his friends, Isaiah, Stephanie and Sandy, Dennis is sure to think of someone in need. With a little creativity and hard work, the four pals might even figure out a way to turn Dennis’ $100 into an even bigger donation.

Children between the ages of 5 and 12 parents, teachers and educators who want to encourage reading literacy and financial literacy Banks, financial institutions, schools and entities that support financial education for students Non-profit agencies, churches and groups that serve youngsters from kindergarten middle school Companies/organizations seeking to enhance their corporate library or educate young people.

Susan Beacham is a financial literacy expert, speaker and award winning, nationally syndicated columnist. Her commentary has appeared in the Wall Street Journal, MONEY, Time and Newsweek. Susan has been featured on The Today Show, Right on the Money, The Jane Pauley Show, and Rachel Ray. Susan founded Money Savvy Generation and created the beloved Money Savvy Pig, a four-chambered bank which teaches children the power of delayed gratification through money choices and goal setting.

Lynnette Khalfani-Cox, The Money Coach, is a personal finance expert, television and radio personality, and the author of numerous books, including the New York Times bestseller Zero Debt: The Ultimate Guide to Financial Freedom. Lynnette has appeared on such national TV programs as The Oprah Winfrey Show, Dr. Phil, The Tyra Banks Show and Good Morning America. She has also been featured in top newspapers including the New York Times, Wall Street Journal, Washington Post, and USA Today, as well as magazines ranging from Essence and Redbook to Black Enterprise and Smart Money.