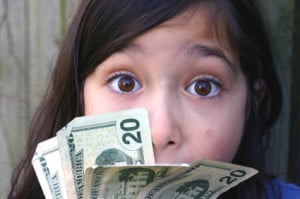 Should You Give Your Kids an Allowance? 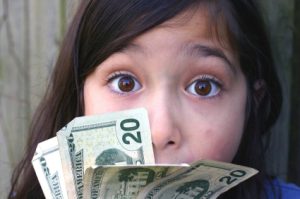 Are your kids at that age where you’re considering giving them an allowance?

If so, you’re not alone.

According to a survey from T. Rowe Price, nearly half of parents in the U.S. give their children allowances.

But not everyone is convinced allowances are a good idea. In my opinion, an allowance can be a great teaching tool for kids and teens.

Here are just a few things your children can learn from getting an allowance.

The Value of Hard Work

First, the value of hard work.

Nearly 9 out of 10 parents don’t just dole out allowances to their kids. Instead they make them earn it. And why not? Kids need to learn, as early as possible, that the best way to get money is to work for it.

So you might have your kids do extra chores around the house, wash the car or walk the dog. Whatever you’d like.

But make it clear to them that that allowance you’re providing will only be given when they meet work hard for it.

Trust me: children appreciate money a lot more when they have to earn it, rather than just having cash given to them.

The Art of Negotiating

And here’s another benefit of an allowance: It can help your child learn the fine art of negotiating.

You might not like it at first when your 10 year old asks for more money to take out the trash on the weekends. But at least you can humor him, and ask him why he deserves more money for that chore.

His answer will allow him to practice speaking up for himself, and to recognize his own value. That’s a skill that will come in handy later in life when your child has to negotiate with an employer.

How many times has your child ran out of their own money – and then come running to your for more cash? It’s something nearly all of us parents have experienced.

Well, you can take the opportunity to talk to your child about saving money versus spending it. And also about spending wisely on the things they really need – instead of just blowing money on any and everything they want.

When kids get an allowance – and you stick to it and don’t give them more money before they’ve earned it – they come to the conclusions that they’ve got to be wise about preserving their dollars.

And in the end, don’t we all want our kids to be smarter with money – and to become better savers too?