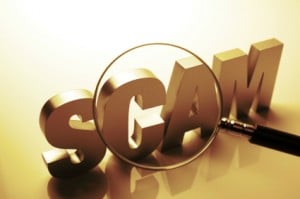 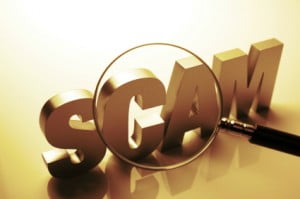 Every year, the Better Business Bureau (BBB) investigates thousands of scams in the United States, and 2012 was no exception.

Millions of consumers fell victim to a host of cons, scams and frauds in 2012, ranging from illegal investment schemes to bogus loan offers and more.

While some con artists use old-fashioned phone calls as their method of choice, cyber-criminals prefer the anonymity of the Internet and even like to use new-age social media tools to target their victims.

So how can you protect yourself from financial scams?

Start by knowing the major cons that thieves are running.

Here are the top 10 scams, according to the Better Business Bureau:

This is scam typically involving an online advertisement. The person perpetrating the fraud will use an ad that tempts you with a seemingly unbeatable offer – something like “Get Paid Just for Driving Around.” Then the fraudster will claim that a well-known company will pay you roughly $400 a week just for you agreeing to slap the company’s logo on your car.

At first everything sounds good. They promise they’ll send you a check – and they do. But then you’re supposed to deposit the check into your account and subsequently wire part of the payment to a graphic designer who will allegedly customize the ad for your vehicle. That’s when things turn nasty.

The check they send you ultimate bounces, but the money you’ve sent to the graphic designer is gone, and you have no way to contact anyone involved in this scam.

Unfortunately, fraudsters love to prey upon the elderly, which is why the “Grandparents Scam” has been around for a very long time.

With this con, someone claiming to be the grandchild (or niece, nephew or friend) of a senior citizen calls, texts or sends an email to the intended fraud victim. The person claims to be traveling out of the country and to have lost all their money and ID. Sometimes, the person posing as the grandchild may even claim to have been mugged, hurt or arrested – to try to give a sense of urgency to the situation.

Bottom line: this is a major con job. The person emailing or calling on the other end of the phone is simply trying to get money under false pretenses.

To avoid this ploy, be sure to check with other relatives of the family member who is supposedly in trouble. Chances are, the individual who desperately “needs money” isn’t really out of town – but is safe at home.

Many people love to shop. And that’s exactly what criminals using the “mystery shopping” scam are counting on. They tell you that you’ll have so much fun and make a lot of money doing something you already love – shopping.

Then they add a “hidden” element to the whole activity, upping the ante and calling you a “secret shopper.”  Sound wonderful, right? Wrong.

What these con artists are really trying to do is send them a check, wire money, or reveal your bank account data. Of course, they mask this intention by saying they need your info to send you a paycheck, or by claiming that they’ve sent you an “overpayment” that has to be sent back.

Steer clear of mystery shopper scams by going through a legitimate group, like the Mystery Shopping Providers Association. You can find reputable jobs via their  website at www.mysteryshop.org.

Loan scams were rampant in 2012 – mainly because credit was so tight and it was tough to get traditional bank loans. To appeal to those desperate for borrowed funds, crooks promise people “easy” loans – including loans with no credit check.

But, of course, there’s always a catch.

In this instance, the scammer says you first have to pay some kind of fee, or buy an “insurance policy” in order to “secure” the loan.

Sadly, people who paid these upfront fees were just tricked out of their money. There was no loan because this was just a scam from beginning to end.

For years, financial predators have used the “government program” ruse as a way to fool naïve or desperate consumers. But just before President Barack Obama was a second term in 2012, a prevalent political scam emerged across America.

During the hot summer months, as utility bills were soaring, consumers throughout the U.S. received bogus calls, letters, and emails about “new government program” to pay their utility bills. The sneaky and fraudulent hook was: if you helped Obama get re-elected, his administration would pay for utility bills.

In reality, though, this was yet another identity theft scam designed to obtain people’s person information, including their bank account data.

This scam really took a lot of gall. It’s one where fraudsters claimed to actually represent the BBB, the FBI, or some other trusted group. The con artist would call from a phone number in Jamaica (area code 876) and would claim that they had a terrific prize for the “winner” – something like a $2 million check or a brand-new Mercedes Benz.

So what was the catch? The “winner” had to pay a “fee” or a “tax” in order to collect his or her winnings. Once they did, they’d never hear from the scammer again, and they would have lost whatever funds they paid.

The BBB says that two top social media sites, Facebook and Twitter, were exploited in one of the top 10 scams of 2012. If you’re on Twitter, you may have seen Fake Facebook Tweets scam, which was particularly common last year and continues even into 2013.

Here’s how it works: You get a Direct Message from a friend on Twitter claiming there was some “funny” or “embarrassing” video of you on Facebook.

Without thinking, or perhaps nervous about what the video could be, you click on the link to this so-called “embarrassing” video.

After you click the clink, an error message appears saying need to update Flash or some other video player. But that file really isn’t a new version of Flash; it’s a dreaded virus or malware that can steal confidential information from your computer or smart phone.

Twitter suggests that you report such spam. Also, if you’ve fallen for such a scam, reset your password and revoke connections to third-party applications.

Home improvement scams come and go every year, but in the wake of so many floods and storms in 2012, the BBB investigated plenty of these frauds.

One scam that stood out involved the high level of “storm chaser” activity following Super Storm Sandy. While some legitimate out-of-town contractors offered tree removal service, roofing work, and general home repairs, there were also many problem contractors with who storm-ravaged residents had to contend.

According to the BBB, various contractors were unlicensed, uninsured and ill-prepared for the work. And unfortunately, some contractors were just outright scam artists who intentionally took deposits and other money for home improvement work, and then never even bothered to show up and do the job for which they were hired.

Sellers of fake sports memorabilia and phony tickets creep up annually among the list of top fraudsters tracked by the BBB. In 2012, these con men came out in full force, hawking everything from bogus Super Bowl and World Series tickets to counterfeit tickets to the London Olympics.

And it’s not just fake tickets that were sold. Some scammers also sold cheap knock-offs in front of stadiums. Others set up websites showing plenty of sports gear, but all these sites were just fronts designed to steal people’s money because the website owners never had any goods to begin with.

Americans nationwide grieved over the horrible shooting at Sandy Hook Elementary School in Newtown, Connecticut. The 20-year-old gunman shot and killed his own mother, 20 children and six adults at the school before turning the gun on himself.

As disgusting and opportunistic as it may sound, some scammers actually took advantage o the Sandy Hook tragedy to con well-intentioned donors out of money.

For example, several bogus social media pages allegedly dedicated to the child victims were really financial scams. Also, the FBI already arrested one woman for pretending she was the aunt of one of the children killed; she said she was a relative to allegedly increase her “fundraising” efforts.

And into 2013, state and federal agencies continue to investigate other possible frauds and misleading solicitations connected to the Newtown shootings.

While it’s understandable to want to give money or other aid in response to such tragedies, it’s also smart to make donations judiciously.

The BBB Wise Giving Alliance offers tips for donors to understand how and when to best support individuals and communities dealing with crises.

Even though the dollar amount of the fraud involved in Newtown charity scams will pale in comparison to other financial schemes, the sheer audacity of this scam — not to mention, how low down these cons artists were — led the BBB to dub this one as the  “Top Scam of 2012.”

The overall annual BBB list of “Top 10 Scams” is based on information obtained from consumers, federal agencies and other reputable information sources.

The Better Business Bureaus has a special website, BBB Scam Stopper, developed in partnership with Western Union, to educate you about various scams and to advise you how to avoid or report those fraudulent schemes.

Also, if you want to check out a company in the U.S. or Canada before doing business with them, search for the business at BBB.org.