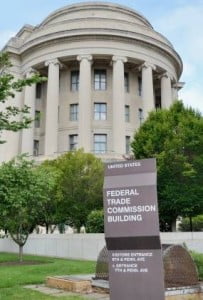 Identity theft is once again the top consumer complaint in America, according to data received by the Federal Trade Commission and released in the agency’s 2012 annual report of complaints.

In all, the FTC received more than two million complaints from U.S. consumers in 2012.

That was a record number of consumer complaints and it marked the first time that customer gripes to the watchdog agency surpassed the two million mark.

Complaints about identity theft represented the lion’s share of consumer problems. ID theft complaints comprised 18% of all consumer grievances logged with the FTC in 2012.

It was also the 13th year in a row that consumer woes over identity theft led the FTC’s complaint list.

Even more troubling, FTC officials reported that 43% of all identity theft complaints were related to tax or wage-related fraud – a massive and growing problem that the IRS and states nationwide are struggling to contain.

According to the FTC, here is a list of the top 10 consumer complaints in 2012:

Here are the actual reported numbers and percentages per the FTC’s report: 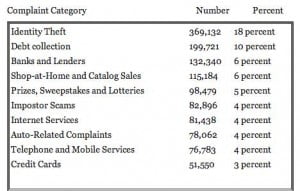 If you’ve been the victim of ID theft involving taxes or wage-related fraud, or if someone stole your Social Security number, read my advice on what to do when an identity thief strikes.