The Money Coach Blog
May 29 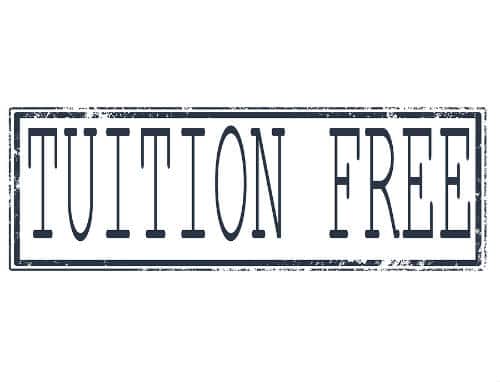 Even though the vast majority of U.S. colleges and universities do charge tuition, there are about a dozen schools in America that are classified as so-called tuition free colleges or no tuition institutions.

If you get accepted into one of these schools, your worries about tuition can be put to rest.

These schools forgo tuition dollars because they want their students to pursue higher education without excessive worries about money. They also don’t want students to be riddled with college debt upon graduation.

But be warned: even if you attend a tuition free school, you still typically have other college expenses to contend with, like housing, meals, books and supplies.

You should also know that competition to get into many tuition free schools is fierce, and some schools require that students possess special talents.

For instance, musically gifted applicants might want to seek admission to the Curtis Institute of Music in Philadelphia, a prestigious conservatory that covers all tuition costs for each of its talented students. Curtis offers programs of study in a range of areas, including Brass, Guitar, Strings and Vocal Studies. The school even loans Steinway grand pianos to all students majoring in Composition, Conducting, Harpsichord and Piano.

During the 2013-2014 academic year, Cooper Union charged no tuition to its undergraduates, but in the wake of the Great Recession, the school did begin charging tuition to its small group of graduate students.

According to its website, Cooper Union awarded half tuition scholarships to all incoming students starting in the fall of 2014. The school also promises to award merit aid to “exceptional students” and to provide need-based aid to low-income students “to help cover tuition, housing, food, books, supplies, etc.”

America’s service academies represent another form of “no tuition” higher education institutions. These storied institutions include the Air Force, Coast Guard, Military and Naval academies. In exchange for agreeing to serve their country for five years, students who get into these elite schools pay no tuition and get living stipends as well.

On the international front, there’s even an institution called University of the People, which bills itself as the world’s first tuition-free online university.

Supported by software behemoth Microsoft, this U.S. accredited, non-profit school has a scholarship program to mentor, train and ultimately provide jobs to promising young adults across the African continent.

The university was launched in November 2013 as part of Microsoft’s 4Afrika Initiative. The school taps Microsoft employees around the world who provide students with leadership and technical training in computer science and business administration.

University of the People is affiliated with the United Nations, the Clinton Global Initiative, New York University and the Yale Law School Information Society Project.

Applicants must be at least 18 years old, possess a high-school diploma or the equivalent, and have reliable Internet access. By mid-2014, the school had already registered online students from more than 140 countries around the globe.