A new study from BankRate.com has found that 63% of Millennials in the U.S. – those between the ages of 18 and 29 – don’t have a single credit card.

I’ll admit: I was initially surprised by this new data. At first blush, I wouldn’t have guessed that young adults would be opting out of credit cards in such high numbers.

But upon deeper inspection, there are a number of things that explain what’s going on, as I explained during a recent appearance on this topic on CNBC.

1. The impact of federal legislation

Historically, a lot of young adults got their first credit card while in college. But the CARD Act has made it tougher for banks to issue credit cards to people under 21 years old. To get a card, a person must have a co-signer or must be able to show income that proves they can pay off their debts. Credit card marketing and solicitations are restricted on campuses.

According to figures from Sallie Mae, ever since the introduction of the Card Act in 2009, credit card use has declined each year since 2010, which was when Sallie Mae’s How America Pays for College study started tracking card ownership. 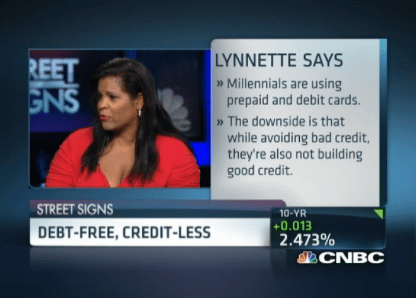 2. The legacy of the Great Recession

During the Great Recession, plenty of young adults saw their parents getting laid off, saw the foreclosure crisis and saw the problems that came from having too much debt. So a lot of Millennials want to avoid those issues.

In addition to the BankRate.com research, other research into Millennials’ financial behaviors is very telling. For example, a study this year from Prudential found that Millennials have vastly different priorities than Gen Xers and previous generations. In a nutshell, Millennials are focused on three things: paying off debt, buying homes and starting businesses. Many of them are worried about student loans. So, being credit-card averse is probably about not wanting to be over-leveraged or wanting to start careers/business without the potential strain of credit card debt.

Research from FICO last year also highlighted the fact that Millennials aren’t using credit cards as often. FICO researchers found that Millennials were paying down every category of debt – including credit card debt. The one exception: student loan debt continued to grow as a result of rising college costs.

4. Millennials are using other payment technologies

Millennials are quite comfortable using PayPal, prepaid cards and debit cards. There are pros and cons to this. The convenience factor is good. But the downsides to these situation shouldn’t be overlooked.

And finally, when many Millennials without credit cards find themselves in a financial jam and need quick access to cash, increasing numbers of them are turning to payday loans and car title loans.

So how old were you when you got your first credit card and what do you think about this trend of Millennials saying “no” to credit cards? Sound off here.

Tips for Managing Your Car Loan

How To Get Approved For A Credit Card

The Best Credit Cards to Reach Your Financial Goals

Tips for Managing Your Car Loan