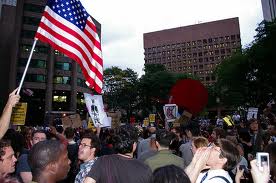 Even Before BofA Dropped Its Debit Fee, Occupy Wall Street Had Already Won 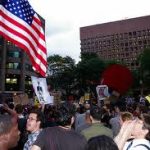 Ever since the Occupy Wall Street protests that launched in New York City began, many people have questioned whether this loosely defined group will “succeed” – and if so, how its success will be measured.

In my view, even before the news broke that Bank of America was dropping its planned $5 debit fee, Occupy Wall Street had already won – and done so in an epic way.

Here are 5 reasons Occupy Wall Street is an undeniable success for the cause of economic justice, and why we all should be thankful for its existence.

1.    The Movement Has Gone Global

Although Occupy Wall Street originated Sept. 17th in Zuccotti Park/Liberty Square, to date the movement has spread to hundreds of American cities. That’s impressive in and of itself. But the Occupy movement in the U.S. is really a fraction of what is taking place around the globe.

On October 15th, as part of a global day of action, “Occupy” protests were held in North and South America and throughout Asia, Africa and Europe, with over 1,500 events occurring in 82 countries. And the movement continues to swell every day – from the bottom up. That is grass roots protest at its best.

The backlash against rising bank fees shows the ability of the masses to vote with their feet and their wallets, resist the establishment, and force whole industries to change. Just as Netflix found out that their horribly misguided pricing policy was a wrong and costly move that lost them at least 800,000 customers, so too are banks discovering that nickel and diming Americans simply isn’t going to work anymore.

That’s why Bank of America has decided to nix its proposed $5 a month debit fee. Likewise, several other major banks have announced they too will not enact planned or potential debit fees and other surcharges that have driven consumers crazy. We should all thank Occupy Wall Street for this. If it wasn’t for the extreme public pressure put on banks – including the Nov. 5th Bank Transfer Day organized by Occupy Wall Street – it’s doubtful that many banks would have buckled and backed off these planned fee hikes.

By refusing to be defined by one specific agenda, or to launch with one spokesperson or one list of demands, the Occupy Wall Street movement let its momentum build and allowed itself to grow organically. This strategy – whether by design or by happenstance – allowed people all around the globe to project onto the Occupy movement their own grievances and complaints.

The result is that some people are protesting exorbitant healthcare costs, some are railing against Big Business, others decry financial bailouts of Wall Street firms, and yet others are raising their voices about high unemployment. And even amid the seeming dissonance there is cohesion in the single outcry that says the 99% of the U.S., or even the world’s population, should not be economically and politically subjugated to the 1% elite.

For the protesters, banks are just a good symbol of all that’s wrong in terms of economic disenfranchisement and the working classes being asked to increasingly shoulder unfair costs.

My prediction: the success of the occupy Wall Street movement will also show Americans that similar protests and pressures can be brought to bear beyond the financial services sectors, to other industries such as healthcare, airlines/travel, and even colleges and institutions of higher learning.

4.    It’s Reminded Americans About the Power of Protest

After the Arab Spring earlier in 2011, which included uprisings in Egypt, Libya and Tunisia, it was easy for Americans to say: “look at residents of the Middle East fighting for democracy and justice.” But it took the Arab protests to show us that massive upheaval can bring about massive change. Indeed, Occupy Wall Street organizers cite the Arab protests as a catalyst and inspiration for the Occupy movement. It’s little wonder that Americans had to look all the way across the globe for such inspiration.

When was the last time Americans themselves seriously took to the streets – en masse and for a protracted period of time – and demanded economic change? The 1960s?  For a while, it seemed Americans had forgotten how to protest. Thankfully, the Occupy Wall Street movement has reminded us all shared sacrifice, protracted struggle and an I-refuse-to-quit tenacity can literally change the world.

Now those in the younger generation won’t need to turn on the TV and watch a decades-old civil rights documentary to see peaceful protest and resistance at work.  They can view a YouTube video, check their Twitter feed or see Facebook (and network TV) updates about civil disobedience in action right now. And 30 years from now, lots of people from today’s Generation X and Gen Y will be able to say to their kids and grandkids: “I was there. I was part of the Occupy movement.”

5.    It Has Captured the Political and Moral High Ground

Finally, Occupy Wall Street has garnered its share of politicians – including President Barack Obama himself – who have lauded the protesters’ right to engage in civil disobedience and who have, in essence, said that their grievances have merit.

Meanwhile, the Catholic Church is also tacitly siding with the Occupy Wall Street movement – albeit not in a formal way. In late October, the Vatican’s Pontifical Council for Justice and Peace issued a harsh critique of the global financial system. Many of the issues the Church raised echo very closely the themes and grievances espoused by Occupy protesters.

The Vatican report was careful to say that it was not issued in response to the demonstrations around the world, but it nevertheless highlighted the need for “ethics over the economy” and “embracing the logic of the global common good.”

When asked about the similarities – and the timing of the Vatican report – Bishop Mario Toso, secretary of the council said: “It is a coincidence that we share some views. But after all these are proposals that are based on reasonableness.”

Call it a “coincidence” or whatever you want, but this was a case of the Vatican speaking out about the very same Wall Street practices and financial system that Occupy protesters believe is inherently unfair and unjust. Will Pope Benedict IVI show up at Liberty Square and give a formal blessing to protestors? Fat chance. But this Vatican report was a moral shot in the arm for Occupy Wall Street protesters – and one, like the movement itself, that didn’t go unnoticed around the globe.