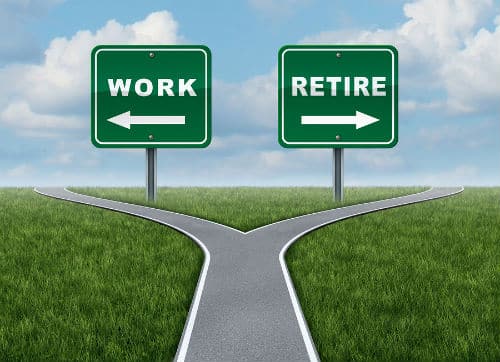 7 Things That Can Derail the Timing of Your Retirement

Are you sure that you are adequately prepared for retirement?

Whether you’re thinking of retiring three years from now or 30 years into the future, it’s important to plan for a variety of “what if” scenarios that can greatly impact the timing of your retirement.

We all know that the majority of Americans don’t save enough for retirement. In fact, 36% of adults in the U.S. have no money at all socked away for retirement, according to data from Bankrate.com.

Even if you happen to be a diligent saver, you may not have created a solid financial Plan B to account for the risk that your retirement won’t happen at the time when you think it will.

That situation happens every year to countless millions of people in the United States: they wind up retiring either far sooner or much later than anticipated.

Fortunately, you can defy the odds and safeguard the timing of your retirement so that it does indeed happen according to your desired schedule.

The key is to become aware of, and then plan for, a variety of circumstances that can impact your retirement plans.

If you fail to strategize around certain possibilities, chances are one of the following seven situations will cause you to reach retirement at the point you least expected.

Situation #1: Lack of money forces you to work longer

One of the chief reasons people don’t retire “on time” or “early” when they want to is that they’ve simply not stashed away enough cash for retirement.

How much funds you’ll need to last in retirement has been the subject of numerous books, articles and countless discussions between investment advisors and their clients. The problem, of course, is that there are so many unknowns – particularly the fact that no one knows when he or she will die.

But since Americans age 85 and older are the fastest-growing segment of the U.S. population (thanks to advances in technology and medicine), anyone trying to retire around age 65 would be wise to have enough funds set aside to last at least 20 years. Financial planners say it’s even more prudent to have enough savings to last to age 100; that way you can be pretty darn sure you’ll never run out of money during your Golden Years.

One thing is certain: if you reach your late 50s or early 60s with little to no money in the bank, you won’t be retiring anytime soon. You’ll likely have no choice but to keep working in order to support yourself.

Situation #2: Poor health causes you to exit the workplace earlier than expected

A majority of America’s oldest Baby Boomers (54% of them) have retired earlier than planned, according to an MMI study.

Among those Boomers, 32% faced health issues that were severe enough to force them to checkout of the workforce sooner than anticipated.

Those findings are echoed by data from the Washington, D.C.-based Employee Benefits Research Institute. An EBRI study found that 47% of people retire earlier than planned, including 55% due to health or disabilities.

Situation #3: You lose your job unexpectedly

Any number of scenarios in the workplace could lead to you getting a pink slip prematurely. And just like that: your retirement timing could be thrown off in a major way.

You might lose your job to downsizing, automation or even a younger co-worker who is suddenly the boss’s new favorite guy or gal. Is there nepotism going on, ageism, or just a preference on the part of employers to hire and retain younger, lower-paid workers?

Whatever the case, this is an especially big risk for Baby Boomers, who were born between 1946 and 1964.

MMI’s study suggests that 25% of older Baby Boomers (about 1 in 4) retired earlier than expected due to job loss. Similarly, EBRI’s data suggests that 20% of workers (1 in 5) face an earlier retirement because they’ve been laid off.

Situation #4: You’ll have to become a full- or part-time caregiver

Have you ever considered how you’d handle your job responsibilities if your spouse or an aging parent because very ill or incapacitated and needed your help just to perform basic duties like eating or bathing? For most people, holding down a job while also acting as a care-giver to a loved one is just too much too handle.

Little wonder, then, that nearly one in four Americans (23%) surveyed by EBRI said they had to quit working before they originally intended in order to keep up with care-giving duties.

Even if you are lucky enough to have a spouse or parents in relatively good health, that doesn’t mean your children or grandchildren might not come to rely upon you heavily while you’re still working. A full 62% of Americans aged 50 and older provide financial support to family members, and AARP reports that 5.8 million children live in their grandparents’ homes. Some of these elderly Americans are being forced to keep working – and not retire – because they now unexpectedly have extra mouths to feed. (See this list of “what if” scenarios that can impact your finances).

Situation #5: You and your spouse don’t agree on retirement issues

You might spend an entire lifetime with your mate and think you know him or her like a book. But then when you think it’s time to retire, he or she has completely different plans. For example, what if you want to retire at the same time as your significant other and then travel together, but your mate would love nothing more than keep working until the day he or she dies?

Or maybe your spouse wants to move someplace different in retirement – out of the country, to a warmer climate or just closer (or further) away from the kids and grandkids. If you two don’t see eye-to-eye on these and other retirement matters, those disagreements can completely derail the timing of when one or both of you enters retirement.

Situation #6: Your spouse passes away

The death of a spouse is hard enough to endure emotionally. But painful economic realities often compound this personal tragedy, especially for women. Statistics show that 40% of all widows fall into poverty after the loss of a spouse, due to a diminished income, lost pension, or reduced Social Security benefits.

Consequently, many of these individuals will have to keep on working, or if they’ve already retired, they may be forced to try to re-enter the workforce in order to make ends meet.

Situation #7: You divorce your spouse later in life

Divorce is one final scenario that could throw a monkey wrench in the timing of your retirement plans.

Even if your marriage is rock-solid, don’t think it could never happen to you.

The sad truth is that divorce after age 50 is getting more common. In fact, the Census Bureau’s American Community Survey reveals that 15.4% of individuals aged 50-plus are divorced and another 2.1% are separated.

Now that you know 7 things that can derail the timing of your retirement, it’s time to create an economic backup plan to minimize these risks.