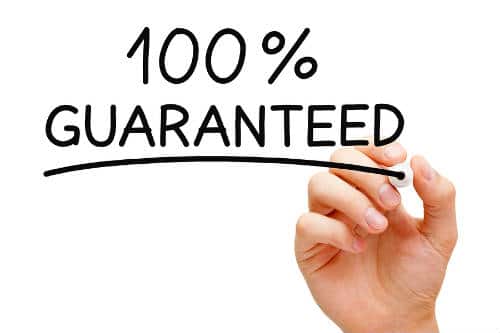 Tuition guarantee programs can save your family a lot of money.

Tuition guarantee programs are a smart way to cut your tuition expenses and help you graduate on time.

Those are two enormous benefits – especially since escalating tuition costs are driving many people into student loan debt, and only about 4 out of 10 college students in America earn their bachelor’s degree in just four years.

Fixed-rate schools, as I explained in a previous article, promise that they’ll lock in a specific rate of tuition over four or five years.

With a tuition guarantee program, however, a college or university promises to pay your tuition if you don’t graduate in four years.

One such program is Temple University’s new “Fly in 4 initiative, which launched in the 2014-2015 school year. I profiled “Fly in 4” in my book, College Secrets.

Under the “Fly in 4” program, Temple limits the number of hours per week that students have to work, and the school guarantees that students can still graduate in four years.

Temple reduces the workload of 500 students annually by giving those with financial need annual grants of $4,000. These funds allow students to devote more time to studying and less time to working.

But the “Fly in 4” Program doesn’t go one-way. Students must also meet certain obligations, such as consulting each semester with an academic advisor, registering early for classes, and completing a graduation review at or prior to completing 90 credits.

If, for some reason, students still can’t graduate on time, but they’ve fulfilled all of their responsibilities, Temple will pick up the tuition cost of any remaining classes.

That’s a sweet deal for diligent students who take their academics seriously but need financial assistance to avoid working too much. Incoming freshman and transfer applicants are eligible for the program.

The Fly in 4 initiative is the brainchild of Temple’s president, Neil D. Theobald, who came to the university in 2013.

An expert in higher education finance, Theobald was the first in his family to go to college, which was made possible because he got a full scholarship.

As a result of his own personal and professional experiences — Theobald was also the former Chief Financial Officer at Indiana University — he has made college affordability and lowering student debt a priority at Temple.

“What we’ve found is that students from low- and middle-income backgrounds tend to take longer to complete their degrees, in part because they spend a lot of time working,” Theobald said in announcing the Fly in 4 Program.

But for nearly 50 years, “researchers have shown that college students employed more than 15 hours per week during the school year earn much lower grades than do those working fewer hours for pay,” Theobald said. “In addition, time-to-graduation has become the primary determinant of student debt.”

“Temple students must not keep their futures waiting,” Theobald added. “Under this initiative, our students will be able to limit their debt and advance more quickly into careers that will allow them to pay off the debt they do acquire.”

There are other benefits from tuition guarantee programs as well.

For the state of Texas, a legislative initiative rewards students who graduate on time. It’s called the Texas BOT, or the “B-On-Time Loan Repayment” program and it offers low-interest loans to financially needy students who start out at two-year community colleges and four-year public colleges, as well as private universities.

And here’s the kicker: those college loans are later forgiven for undergraduates who finish their studies within specified time limits. Furthermore, undergrads can receive tuition rebates of up to $1,000 if they graduate on schedule.

So if you’re a college student – or the parent of a child pursuing a degree – be sure to inquire about tuition guarantee programs that can save your family money.