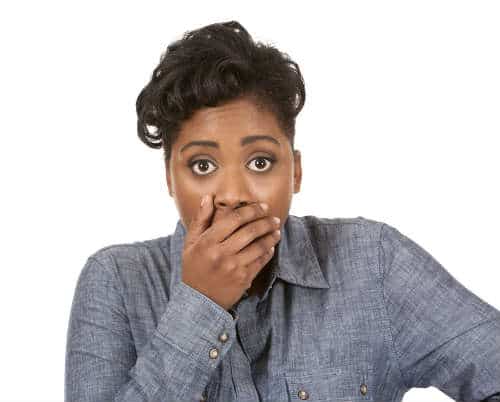 Many people living with crushing debt focus on the ways that those out-of-control bills affect their finances.

And it’s easy to see why.

When you have massive student loans, an enormous mortgage, or maxed out credit cards, those obligations can be a huge financial burden. They drain your wallet, put you in the trap of living paycheck to paycheck, and limit your ability to save money and invest for the future.

While it’s clearly true that excessive debt is harmful to your bank account, what’s less obvious are the many ways that debt wreaks havoc on other aspects of your life.

Here are 5 horrible things about being deep in debt that has nothing to do with money or the interest charges you pay on your debts.

Anyone up to his or her eyeballs in debt can experience financial anxiety. But Millennials seem to be particularly stressed out about their debts.

Nearly 41% of those in Generation Y are “chronically stressed” about money and Millennials’ top financial priority is being debt free (64%), according to a recent Better Money Habits Millennial Report from Bank of America and USA TODAY.

It’s not hard to understand why this is the case – especially since many members of the Millennial crowd owe large student loans, which now collectively total $1.3 trillion nationwide.

In a study published in the May 2015 issue of the Journal of Family and Economic Issues, researchers from the University of Wisconsin-Madison suggested that credit card debt is statistically linked to depression – especially among individuals without college degrees, unmarried people, and those approaching retirement.

In fact, the study found that as people’s short-term debts rose, their symptoms of depression tended to increase as well.

By contrast, having longer-term debts like student loans or mortgages was not statistically linked to depression. Perhaps because people view those obligations as “good” debt that helps them get ahead.

Nonetheless, even so-called “good” debt can be depressing if you can’t afford to pay it. Just ask the folks at StudentDebtCrisis.org, which tracks people’s real-life student debt (horror) stories, including tales of those who’ve considered suicide to escape their debts.

If that’s not enough, here’s another startling reminder that too much debt is harmful for your mental health:

People in debt are three times as likely to have mental health issues compared with individuals who aren’t in debt, according to researchers from the University of Southampton and Kingston University in the U.K., who analyzed 65 different academic papers on the subject.

These associations held constant even after researchers controlled for prior socioeconomic status, psychological, physical health, and other demographic factors.

Debt often drives a wedge between couples, especially married people and those who are engaged to be married.

The problem isn’t so much the debt itself, but all the arguments about it: like who spent what on the credit cards; whether to take on certain forms of debts, such as a mortgage or a car note; and how aggressively debts should be paid off, and in what priority order.

So one consequence of having debt is that it can easily plants the seeds of discord in a marriage. And research shows that financial disagreements are a strong predictor of divorce.

Unfortunately, a lot of couples bring debt into their relationships from Day 1. According to a survey from PayPal and the wedding website TheKnot.com, 36% of U.S. couples went into debt for their wedding, paying for the Big Day with credit cards.

Many individuals stuck in a debt rut also feel stuck in their current jobs or careers. They may have a strong interest in volunteer work, civic service, entrepreneurship or just a passion to do something else – even something in an entirely different industry.

But when debt is hanging around, your job options seem limited because you might feel that you can’t afford to quit a job or follow up on various social, intellectual and professional passions – at least not while you have a ton of bills to pay.

The lesson from all of this is simple: even if you believe that you must take on debt in order to reach certain goals, like buying a home or paying for college, be sure to work toward paying off those bills as quickly as possible.

For the sake of your personal, physical, mental and financial well being, the optimal circumstances is to be entirely debt free.